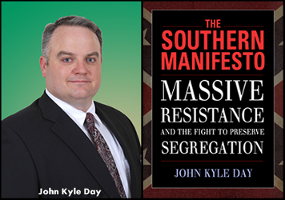 At Legacies & Lunch, John Kyle Day, associate professor of history at University of Arkansas at Monticello, will discuss the efforts of the United States Congress to delay desegregation in the 1950s and onward.  The program will take place today (February 3) at 12 noon at the Darragh Center on the CALS campus.

On March 13, 1956, ninety-nine members of the United States Congress promulgated the Declaration of Constitutional Principles, popularly known as the Southern Manifesto. This document formally stated opposition to the landmark United State Supreme Court decision Brown v. Board of Education, and the emergent civil rights movement. This allowed the white South to prevent Brown‘s immediate full-scale implementation and, for nearly two decades, set the slothful timetable and glacial pace of public school desegregation. The Southern Manifesto also provided the Southern Congressional Delegation with the means to stymie federal voting rights legislation, so that the dismantling of Jim Crow could be managed largely on white southern terms.

Day’s book, The Southern Manifesto: Massive Resistance and the Fight to Preserve Segregation, narrates this single worst episode of racial demagoguery in modern American political history and considers the statement’s impact upon both the struggle for black freedom and the larger racial dynamics of postwar America.

Legacies & Lunch is free, open to the public, and supported in part by the Arkansas Humanities Council. Programs are held from noon-1 p.m. on the first Wednesday of each month. Attendees are invited to bring a sack lunch; drinks and dessert are provided. For more information, contact 918-3033.