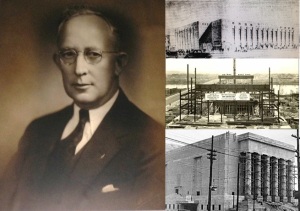 R. E. Overman assumed the office of Little Rock mayor in April 1935. Around that time, a new wave of New Deal programs were filtering down from Washington DC to cities.  It can be said of Mayor Overman that he did not meet a New Deal program he did not like.  From rebuilding the sewer system, to creating a public water utility, to constructing of structures for the Museum of Fine Arts, Little Rock Zoo, and Boyle Park, Mayor Overman signed the City up for program after program.

While the programs were all worthwhile, and in some cases absolute necessities, Mayor Overman did not seem to consider how these massive projects running concurrently would impact the City finances.  In November 1935, he submitted a proposal to the Public Works Administration for the construction of a new municipal auditorium to be located at the northeast corner of the intersection of Scott Street and Capitol Avenue. It would have taken up three/quarters of that block and wrapped around the Women’s City Club building (now the Junior League of Little Rock headquarters).  Because of other projects in the works, he did not pursue any further action on the auditorium project at the time.

In November 1936, Mayor Overman asked the City Council to place three bond issues on a special election ballot for January 1937, one of which was a municipal auditorium. Though a location had previously been identified in 1935, at this point in time supporters made a concerted effort to disclose that no location had been selected.  After the election was called, there was a concerted effort by supporters of the three separate bond issues to collaborate.  Voters overwhelmingly approved all three issues, and Little Rock’s journey to a municipal auditorium at last was underway. Perhaps.

Over the summer, architects and lawyers were selected. In the autumn, a consultant was hired to help with the selection for the site.  The month of October was consumed with City Council battles over the auditorium site.  Mayor Overman favored a location at Markham and Spring Streets (now site of the Cromwell Building and the Bankruptcy Courthouse). Because the Federal Government owned half the site and did not want to sell it, that location was deemed not feasible – though that did not stop Mayor Overman and others from repeatedly citing it as their first choice.  The only person who favored the location at Markham and Broadway did not have a vote: Planning Commission Chair J. N. Heiskell. Though he had no vote, he had the twin bully pulpits of Planning Commission and the Arkansas Gazette. As other sites fell by the wayside, he kept advocating for it.  Finally, the City Council approved of Heiskell’s choice, and the auditorium had a site.

The groundbreaking had to take place by January 1, 1938, or the money would be rescinded. After finalizing a location, planning could get underway.  With a week to spare, the ground was broken on December 24, 1937.  Mrs. Joseph T. Robinson, widow of the recently deceased US Senator from Arkansas, joined Mayor Overman in the groundbreaking. This ceremony was the first mention of the building being named in memory of the fallen senator, who had died in the summer of 1937.

Construction progressed throughout 1938 and into 1939.  Because of the precarious state of the City’s finances, Mayor Overman lost the support of the business community.  In November 1938, he lost his bid for the Democratic nomination for Mayor and was denied a third two-year term.  He left office in April 1939.