Born in Little Rock on July 4, 1884, Corydon McAlmont Wassell (called “Cory”) was born to Albert and Leona Wassell. A grandson of Little Rock Mayor John Wassell, he graduated from what is now UAMS in 1909. In 1911, he married Mary Irene Yarnell, with whom he would have four children.  In 1914, the couple volunteered to be Episcopal missionaries in China.  He served there until 1927. Following Mary’s death and his remarriage, he and new wife Madeline Edith Day Wassell returned to Arkansas in 1927.

Dr. Wassell resumed his medical practice. Given his experience with malaria in China, he proved to be an asset fighting malaria among Civilian Conservation Corps members in Arkansas. He was subsequently called to active duty in the Navy in 1936 and stationed in Key West.

After the outbreak of World War II, he was stationed in Indonesia. In early 1942, he refused to abandon his patients after the Japanese started invading Indonesia. Instead, he was able to evacuate a dozen severely wounded men over 150 miles to get to a ship. It took ten days for the ship to get to Australia, during which time it was attacked numerous times.  His official Navy Cross citation notes that he disregarded personal safety while caring for others.

He became an instant international hero. During the early days of the war, his heroism was one of the few bright spots. James Hilton wrote a biography of him; President Roosevelt praised him in a fireside chat. James Hilton wrote of Dr. Wassell in a book which was then adapted by Cecil B. DeMille into the 1944 movie starring Cooper.  Originally Arkansan Alan Ladd was wanted to play Cooper’s sidekick, but Ladd was pressed into military service and unavailable.

Thirty-three years after The Story of Dr. Wassell was released, MacArthur was brought to the screen by Universal Pictures.  It was their attempt to capitalize on the success of the movie Patton, including sharing some of the same members of the production team. 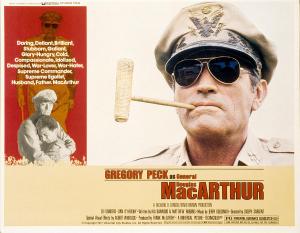 Told entirely in flashback, it stars Gregory Peck as the fabled World War II general who was born in Little Rock. It focuses primarily on events in 1942 during the war, his dismissal by Truman in 1952, and his famous address to West Point in 1962.

Producer Frank McCarthy, who worked on both Patton and MacArthur once said of Patton and MacArthur: “Both were complex men but General MacArthur was complex on a much broader scale. Patton had no ambition except to be a soldier and to command a field army. He was strictly command.”

Most of the film was shot on the backlot at the movie studio, which impacted the quality of the film.  The production budget simply would not allow for overseas location filming.

The film was released in July 1977.  One of the premieres was held in Little Rock. Peck attended a reception in the Arsenal Building where MacArthur was born. Now the home to the MacArthur Museum of Arkansas Military History, in 1977 the building still housed the Museum of Science and Natural History (now the Museum of Discovery).  Since MacArthur only spent a few hours in Little Rock as an adult, it is possible that Peck spent more time in the building than the General did.