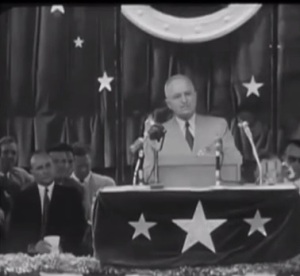 President Truman in War Memorial Park. A photo of him at Robinson does not seem to exist.

Today is Veterans’ Day, a chance to pause and remember those — both living and deceased — who have served in the Armed Forces of the US.  November 11 was chosen since it was on November 11 in 1918, at 11:11 (Paris time), the Armistice was signed to end the Great War, as World War I was then known.  In 1954, the holiday was renamed Veterans Day since the US had been in two military conflicts since the Great War.

A World War I infantry reunion brought President Harry S. Truman to Little Rock in June 1949, a few months after he won his own term in the Presidency. During his time here, he spoke twice at Robinson Auditorium.

Upon arriving, he made some informal remarks:

I am most happy to be here. I am only here in my capacity as a member of the 35th Division. Tomorrow I will address you as President of the United States, and I am afraid you will have to listen, whether you like it or not.

I hope to have a pleasant time in Little Rock, as I always have when I come here. I have been here a dozen times–one of the most hospitable cities in the United States. They know how to treat you, they know how to make you like it, and want you to come back.

I will see more of you later on in the day.

I appreciate the welcome that everybody has given us here this afternoon.

Thank you very much.

Later that night, he spoke at a Ball at Robinson.  It followed a banquet that had taken place at the Hotel Marion.

Governor McMath, the Mayor of Little Rock, and distinguished guests:

I can’t tell you how very much I appreciate the cordial reception which I have received in Little Rock. It has been like coming back home to come down here. It’s a habit of mine and has been for 25 years. I have been here in town many a time, and attracted no attention at all. But my friends were just as cordial to me then as they are now.

And I want to thank Eberts Post No. r for its cooperation with the 35th Division in putting on this ball and entertainment.

My education, so far as taking part on the floor is concerned, was sadly neglected as I grew up. I am a Baptist–not a light-foot one–so I didn’t learn how to dance. But I did learn a lot of other things in life, maybe, that I shouldn’t have learned.

I hope that the 35th Reunion this year will be the usual success that 35th Reunions are. I have missed only one, I think, in 25 years or more. I didn’t want to miss this one. The fact that you had it on a weekend gave me and the congressional delegation of the great State of Arkansas an opportunity to be present and attend the meeting. Otherwise, we would have had to stay in Washington and work.

It doesn’t make any difference, though, where the President goes, his work follows him up. I told the congregation this afternoon–you see, I am talking as a Baptist talks–that it didn’t make any difference where I went, I have to sign my name some 600 times a day to keep the country running. And it has, up to date, and I think it will continue, at least for 3 1/2 years more.

I am looking forward to a most pleasant time. I am talking to you now as a member of the 35th Division only, but if you want to hear the President of the United States you had better come out to the stadium tomorrow, and I will tell you something that will be good for your souls.

Thank you very much.

The following day he gave a national address on foreign affairs at the dedication of War Memorial Park.  It was carried on coast-to-coast radio.  There was no radio coverage of his remarks at Robinson, but a large press corps of national correspondents captured his words.

The Little Rock Mayor to whom he referred was Sam Wassell.  Mayor Wassell’s wife had christened the USS Little Rock during World War II.  A first cousin, Dr. Corydon Wassell, was a war hero who had been played by Gary Cooper in a movie.