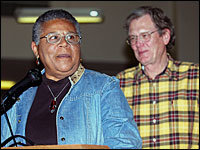 On December 17, 1957, perhaps the most famous chili bowl was dropped in the Central High cafeteria.

It was, of course, not just any chili bowl.  It was dropped by Minnijean Brown as she was being harassed by white students who were trying to make it difficult for her to navigate the cafeteria.

Balancing food on a cafeteria tray and maneuvering around narrow paths around chairs and tables can be difficult in the best of circumstances. But doing it when you are being harassed for the umpteenth time that day makes it even more of a challenge.

Reports differ as to whether she dropped the tray or let it slip. In the pandemonium of the moment, it may be six of one, half-dozen the other.  But what is not disputable is that the chili fell on a junior who was sitting at a table and not taking part in the harassment. That junior was future attorney and UA Little Rock Bowen School of Law professor Dent Gitchel.

While no one had stepped in to stop the pestering, after Minnijean had dropped the chili on Dent, officials swooped in and sent both students to the principal’s office.  Dent was sent home to change clothes.  Minnijean was suspended for six days.  This incident and suspension would be fodder for her foes who pressed for her eventual expulsion in February 1958.  (The student other student involved in that incident – a white female – was only suspended and later returned for the remainder of the school year.)

Minnijean and Dent went their separate ways.  While many knew about the chili episode, the name of the student who was on the receiving end had become forgotten.  It was not until many years later that his name was once again attached to it.  In 2005, he was named in an article in an historical journal.  By that time, he was a retired law school professor.  Later that year, he gave a brief interview to the Arkansas Democrat-Gazette about it.

In March 2006, the Central High Museum Inc. board organized a chili cook-off as a fundraiser.  Minnijean and Dent reunited for the first time since December 1957 to serve as co-chairs and judges of the cook-off.  The other judge was Central High principal Nancy Rousseau.  There were nine chilies made by Little Rock area celebrities:  Mark Abernathy of Loca Luna and Bene Vita, “Broadway” Joe Booker of Citadel Communications, Dave Williams of Dave’s Place, Max Brantley of Arkansas Times, Michael Selig of Vermillion Water Grille, Pamela Smith of KATV, Channel 7, Sanford Tollette of the Joseph Pfeifer Kiwanis Camp, Scott McGehee of Boulevard Bread Co. and state Sen. Tracy Steele.

Eleven years ago – on the fiftieth anniversary of the incident — NPR did a story and interviewed by Minnijean and Dent.  In various interviews, Minnijean has commented that she told officials that day she knew that Dent was an innocent bystander.  In the few public statements he has made, Dent has commented that while he did not cause problems for the Nine, he also was not one of the very, very few white students who befriended them.  Today, they both focus their comments on the continued need for reconciliation as well as facing up to the issues in order to move forward.

So have a bowl of chili today. And think about how far we have come.  And how very far we still have to go.