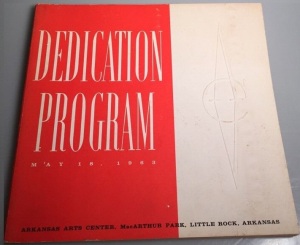 On Saturday, May 18, 1963, amidst fanfare and fans of the arts, the Arkansas Arts Center officially opened its doors.  (This was thirty-five years and three days after the Fine Arts Club had opened the first permanent art gallery in Arkansas in the Pulaski County Courthouse).

Today, the Arkansas Arts Center invites people to stop by for an AAC HBD 56 party to celebrate the 56th birthday of the opening.

The 11:00 am dedication ceremonies took place in the Arts Center Theatre and featured U.S. Senator J. William Fulbright (who was in the midst of championing what would soon be known as the John F. Kennedy Center for the Performing Arts), Congressman Wilbur Mills, Governor Orval Faubus, Little Rock Mayor Byron Morse, Winthrop Rockefeller and Jeanette Rockefeller.

The Arts Center lower level in 1963

Among the exhibits at the Arkansas Arts Center for the grand opening was a special exhibit from the Metropolitan Museum of Art in New York entitled Five Centuries of European Painting.  In Little Rock for six months, this exhibit featured works by El Greco, Titian, Claude Monet, Odilon Redon, Pierre Renoir, Paul Signac, Edgar Degas, and Paul Gauguin among many others and spanned from the fifteenth century Early Renaissance era to the nineteenth century.

Prior to the opening, a profile on the Arts Center in The Christian Science Monitor touted the building as one of the first regional arts centers in the country to be completed. Benefiting from national ties of the Rockefeller family, the events in May 1963, set a high standard for the institution, and for other regional art museums.