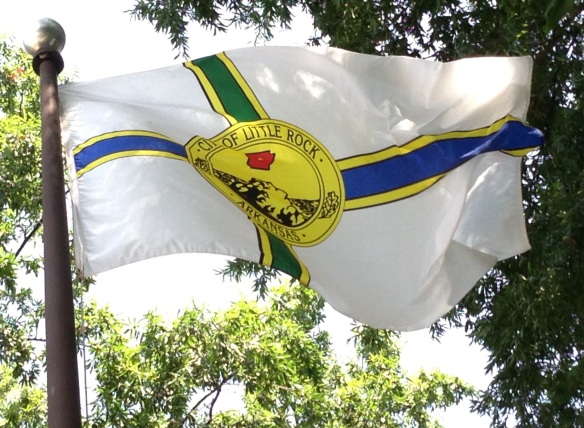 The adoption of Ordinance No. 15,566 was the culmination of a design competition which had been spearheaded by Little Rock City Director Sharon Priest (later Little Rock Mayor, Arkansas Secretary of State and Executive Director of the Downtown Little Rock Partnership).

Prior to the Official Board of Directors meeting that day, a press conference was held in the Little Rock City Board Chambers for presentation of the City’s flag.  The City Beautiful Commission, a commission of the Department of  Parks and Recreation, sponsored a the contest which received a total of fifteen flag designs.

The flags were judged October 12, 1988, by City Directors and City Beautiful Commission Members. Director Sharon Priest presented the winning flag and introduced David Wilson, a law clerk at the Mitchell Law Firm, who designed the flag chosen for the $1,000 first prize. The second-place winner was Craig Rains, who received $500; and the third-place recipient was David Tullis, who received $250.

The flag was adopted by the City Board that night by a 6-0 vote; former mayor and current director Charles Bussey was absent.  Those voting to adopt the flag were Mayor Lottie Shackelford and directors Sharon Priest, Tom Prince, Buddy Villines, Buddy Benafield and Tom Milton.  Priest would be a future mayor while Prince, Villines and Benafield had all served as mayor.

The official description of the flag is as follows:

As the official flag of the City of Little Rock, its symbolism is described as follows: A clean white background of the banner represents the optimism and open potential that the city has to offer. The royal blue horizontal broad stripe symbolizes the Arkansas River which borders Little Rock, and has served as an economical and historical emblem since the city’s beginning. The forest green stripe runs vertical to the royal blue stripe, creating a cross which symbolizes the location and statute of Little Rock—a city serving not only as the crossroads of Arkansas, but a crossroad of the mid-southern United States as well.

The strong forest green color depicts the fields, parks and forests which contribute to the natural beauty of the city. The seal of the flag is a modernized adaptation of the current Little Rock seal. The razorback red silhouette of the great State of Arkansas shows her capitol, the City of Little Rock, represented by the centered star. The star rises directly above “The Little Rock”—the protruding cliff along the Arkansas River, which was discovered in 1722 by French explorer La Harpe, when the city was given the name. The Arkansas River behind the rock and the symmetrical oak leaves in the border of the seal are a stylized illustration of what the flag’s stripes represent—the natural beauty of the city. Finally, the gold color of the seal and bordering stripes symbolize the superior economic history, and the future economic potential that is available in the City of Little Rock, Arkansas.