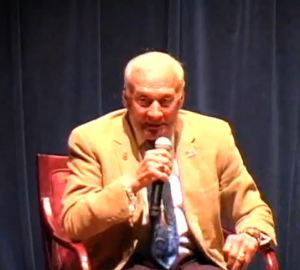 Forty-four years after being the second man to step foot on the moon, legendary astronaut Dr. Buzz Aldrin spoke in Little Rock. His appearance was sponsored by the Clinton Foundation and the Clinton School of Public Service.

He and Leonard David, veteran space journalist and co-author of Dr. Aldrin’s book, “Mission to Mars: My Vision for Space Exploration” were in conversation in Little Rock on August 14, 2013 inside the Robinson Center Music Hall.

Aldrin was engaging, enthusiastic, opinionated and an overall wonderful speaker as he spoke about space exploration and his experiences. A video of his appearance is available here.

Selected into the NASA in 1963, Dr. Aldrin developed docking and rendezvous techniques for spacecraft in Earth and lunar orbit, which was critical to the success of the Gemini and Apollo programs, and are still used today. He pioneered underwater training techniques, as a substitute for zero gravity flights, to simulate spacewalking and during the 1966 Gemini 12 mission, he preformed the first successful spacewalk. On July 20, 1969, Dr. Aldrin, along with Neil Armstrong made their historic Apollo 11 moonwalk, becoming the first two humans to set foot on another world.