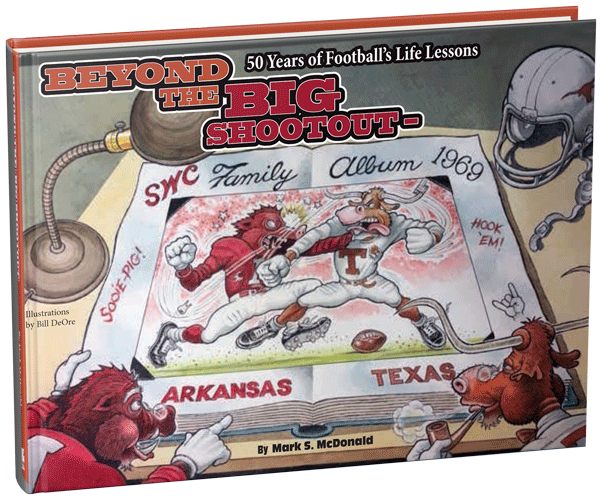 December 1969 – the top two college football teams in the country faced off in Fayetteville with the national championship on the line.  In the stands were the US President, a future US President and several leaders of congress.

Known as The Big Shootout, it was more than just a football game.  Today (September 24) at noon, author Mark S. McDonald will be discussing his book at that historic game that changed the face of football forever. This is part of the Clinton School’s speaker series and will be held at Sturgis Hall.

Right after the game, your life changed, everything changed … recruiting of black athletes in Dixie, new safety rules in football, tighter crowd control, more TV coverage and bigger money in college athletics … Suddenly, for the Arkansas Razorbacks and Texas Longhorns, and players and coaches nationwide, bulbs on a scoreboard no longer defined them. Instead, life came rushing at them.

In a blur, these superior, highly trained athletes were no longer football stars. They were fathers, community leaders, victims of car wrecks and cancer, businesses and marriages gone bad. Some Saturday’s heroes lost their way, others used football to find faith. The competition took on new and different meaning. Who could have predicted such outcomes?

It’s all here, in words of those who lived this epic journey, supported by dozens of period photos and clever original illustrations from award-winning artist Bill DeOre. In his Beyond The Big Shootout – 50 Years of Football’s Life Lessons, author Mark S. McDonald has emerged from his own football past to create a historical narrative on a giant canvas, unlike any other.

For some, the game itself was cruelly damaging. For others, it brought dance-in-the-street joy. But today, looking back, who really won? Was there really a loser?

After reading this one, you will know.