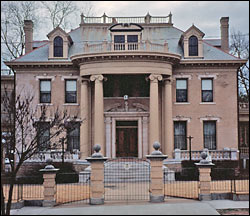 The Hotze House, located at 1619 Louisiana in Little Rock’s historic Quapaw Quarter district, was built by one of Arkansas’ most successful and prominent businessmen.  Designed by Charles L. Thompson, Little Rock’s most prominent architect and constructed in 1900, the house reflects the Beaux Arts tradition combined with Georgian influence.  The interior was reputed to have been designed by Tiffany Studios of New York.  The house has been remarkably well preserved and remains practically unaltered.

Peter Hotze was born in Innsbruck, Austria, on October 12, 1836.  He was young at the time of his father’s death, but Mrs. Hotze’s inheritance made it possible for her three sons to attend the University of Innsbruck.  In 1857 Peter Hotze moved to Little Rock and went into the general merchandise business.

Returning to Little Rock after service and imprisonment in the Civil War, Hotze went into a business as a merchant in partnership with Capt. John G. Fletcher, who had been his company commander.  Each man put $2,500 into the business.  After a while, they limited their business exclusively to the cotton trade.  In 1873 it was decided that Hotze should move to New York to handle that end of the firm’s business.  He lived there for 27 years, in a fashionable neighborhood near Central Park.

In 1900, Hotze retired and returned to Little Rock.  Upon his return in 1900 he built the large house in which he lived with his daughter Clara and son Frederick until his death on April 12, 1901.  He chose to build his home directly behind the small frame house he had built about l869 and lived in during his previous residence in Little Rock.

The Hotze House is one of the finer homes remaining in the state which expresses the opulence of the period in which it was constructed, particularly in the interiors, which are extraordinarily rich in quality. Resting on three and one-half lots, the Hotze House is remarkably well preserved and appears practically the same as when it was first constructed.

It was added to the National Register of Historic Places on August 11, 1975.