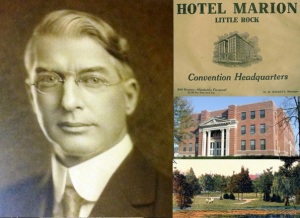 In anticipation of the November 2016 reopening of Robinson Center Music Hall, this week’s Arkansas Heritage Month entries look at seven Little Rock Mayors who worked on proposals for a municipal auditorium between 1904 and 1940.

Former Alderman Ben D. Brickhouse took office as mayor in April 1919.  As an alderman, he had been party to the discussions and hand-wringing over the existing “temporary” auditorium, which was twelve years old at the time.  In June 1920, he and the City Council authorized City Engineer James Rice to have the building demolished.  (Rice’s grandson Jim Rice is an integral member of the team overseeing the restoration of Robinson Center Music Hall.)

On what seemed to be an annual basis, Brickhouse entertained options for a new municipal auditorium.  Sometimes it would be private groups, on at least one occasion, Mayor Brickhouse himself led the effort.  Funding and location always seemed to be stumbling blocks.  Arkansas law forbade the use of public dollars on an auditorium, so the money would have to be raised privately. Few private entities had the money for this type of project.  Another temporary auditorium had been proposed for City Park (now MacArthur Park), but aldermen balked at the expense for a temporary building.

During the Brickhouse administration, the Hotel Marion was the main site for conventions. The auditorium at the Little Rock High School (later East Side Junior High) was used frequently for performances.

Mayor Brickhouse worked behind the scenes to have the Arkansas General Assembly pass legislation to allow for the creation of an auditorium taxing district, much like a street improvement district. In May 1925 Little Rock voters would be given the chance to approve this.  But Brickhouse would not be mayor by the time that election came around.  He was defeated in his bid for a fourth term and left office in April 1925.

Ben D. Brickhouse did return to public service in 1938, when he was elected to the Arkansas General Assembly.  He was reelected in 1940 and died in June 1941.