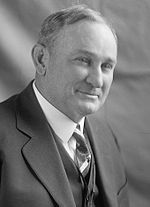 As Arizona Senator John McCain is being remembered in a series of memorial services, it seems an appropriate time to recall the series of services for Arkansas’ senator who was on a national party ticket. That man was Joseph Taylor Robinson.

Like Senator McCain, Senator Robinson was honored in services both in the state he represented as well as at the US Capitol.

Senator Robinson died in Washington D.C. on July 14, 1937.  His wife was in Little Rock making preparations for a trip the couple was to take. Following his demise, Mrs. Robinson went to Washington to accompany her husband’s body back to Arkansas.

The Senator was honored with a memorial service in the Senate chambers on Friday, July 17.  President Roosevelt and the cabinet joined members of the senate on the floor in what was described as a state funeral without pomp.  Mrs. Robinson sat with her brothers and two nephews as well as Bernard Baruch and Arkansas Power & Light’s Harvey Couch, who were Senator Robinson’s closest friends.  Eleanor Roosevelt was one of the many crowded in the senate galleries observing the service.  Following the service his body remained in the chambers until it was transferred to a train to make the journey to Little Rock.

The funeral train bore his body, his family, 50 senators and over twenty congressmen. It reached Little Rock around 8am on Sunday the 19th.  From there, Senator Robinson’s body was taken to his house on Broadway Street until noon.  It subsequently lay in state at the Arkansas State Capitol until being escorted by military to First Methodist Church.

1,500 people packed the church a half hour before the service began. The sun shone through the windows onto the flag-draped coffin as Rev. H. Bascom Watts led the service. Among the pallbearers was former Vice President Charles G. Dawes. Governor Carl Bailey of Arkansas was joined by Governors Richard Leche of Louisiana and E.W. Marland of Oklahoma.

As the funeral procession reached Roselawn Cemetery, thunder echoed. The skies which had alternated between sun and rain that day, returned to rain. A deluge greeted the end of the service and sent visitors hurrying for shelter at the end.