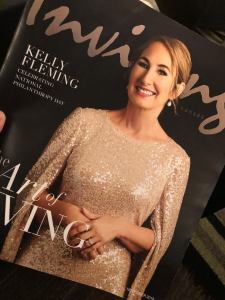 (This honor also garnered her the front cover of this month’s INVITING ARKANSAS – featured with this entry.)

As the AAC’s Director of Development, Kelly is a proven fundraising professional with a commitment to philanthropy.  She leads a staff which continues to surpass annual goals of approximately $2 million, as well as surpassing special event goals, and founded the Townsend Wolfe Society, a planned giving program.

Kelly is an integral part of the AAC’s recent completion of its strategic plan, its re-accreditation, and its aggressive building project and capital campaign.

Prior to coming to the Arkansas Arts Center, Kelly served in fundraising at the Arkansas Repertory Theatre and Heifer Foundation. She is a member of the Little Rock Arts+Culture Commission, and has been an active supporter of many Little Rock arts organizations.