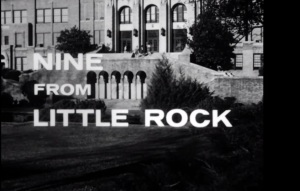 On April 5, 1965, the Academy Award for Best Documentary, Short Subject went to the film “Nine from Little Rock.”

Narrated by Jefferson Thomas, Charles Guggenheim’s documentary looks at the nine African-American students who enrolled in Little Rock Central High School in 1957. Thomas, one of the students reflects on the state of race relations in the seven years that had elapsed (up to 1964).  The film also focuses on Ernest Green, Elizabeth Eckford and Thelma Mothershed.

Guggenheim both directed and co-wrote the film. The latter credit was shared with Shelby Storck, who also produced the film.   The film had been commissioned by George Stevens, Jr., for the United State Information Agency.

The film was digitally restored by the Motion Picture Preservation Lab for the 50th anniversary of its win for Best Short Documentary at the 1965 Academy Awards.  It is available for purchase on DVD and can also be viewed in its entirety on YouTube