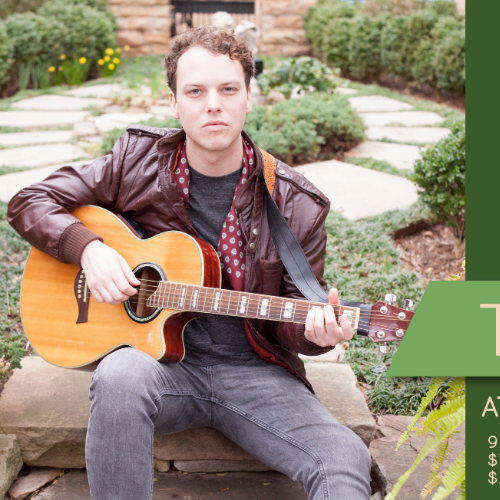 Purchase advance tickets for $7 or pay a $10 cover at the door. Tickets do not guarantee you a seat. To reserve a table, please call (501) 244-9660. You must purchase tickets in order to confirm your reservation for the concert.

ABOUT THE ARTIST
Singer-songwriter Tim Higgins writes and performs songs which spiral around issues dealing with love, loss, grief, and the downfall of society; his are personal songs that often carry broader social implications. Born and raised partly around Detroit, Michigan, and coastal Alabama, his Rust Belt meets Southern upbringing is channeled in his straightforward imagery and gravel-throated delivery.

His teenage and college years in Alabama lead to the formation of Bible Study, a collective of songwriters including Higgins, Emily Dozier-Ezell, and Kori Hensell. Their self-described “convoluted folk” genre garnered much attention in West Alabama, including performances at the Kentuck Folk Art Museum and the historic Bama Theatre. In 2014, Bible Study released their first record, Guilt Trip, recorded at WouldYou Studios in Baton Rouge, Louisiana, under the direction of England in 1819’s Andrew Callaway.

In November 2018, Higgins released his first single, Blight, the title track of his upcoming full length album debut, to critical acclaim. Blight was included on Rolling Stone magazine’s Best New Country/Americana Music on 11/9/18, and a music video was released the same day. Shot in Greensboro, Alabama, and directed by Reagan Wells, the video showcases the beauty, decline, and revitalization of the area, conjuring the experiences of both the artist’s upbringing in Detroit, and his later home in the Deep South.

Higgins currently resides in Nashville, Tennessee, where he is working on a collection of new songs dealing with the ideas of blight, destruction, history, and responsibility.