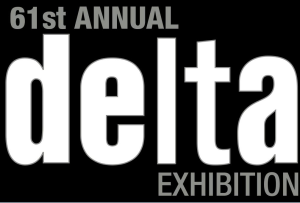 The Arkansas Arts Center’s 61st Annual Delta Exhibition presents a vision of contemporary art in the American South. Founded in 1958, the exhibition provides a unique snapshot of the Delta region.

The Delta Exhibition reflects the region’s strong traditions of craftsmanship and observation, combined with an innovative use of materials and an experimental approach to subject matter. Guest juror Kevin Cole will select the artworks to be exhibited and assign the $2500 Grand Award and two $750 Delta Awards. Additionally, a $250 Contemporaries Award will be selected by the Contemporaries, an auxiliary membership group of the Arkansas Arts Center.

The exhibition is open to all artists who live in or were born in one of the following states: Arkansas, Louisiana, Mississippi, Missouri, Oklahoma, Tennessee, and Texas. Art must be original, completed in the last two years, and not previously exhibited at the Arkansas Arts Center.

This year’s juror was Kevin Cole.  He is a contemporary artist best known for sculptural works, paintings, and intentional use of color. An Arkansas native, Cole’s artwork has been featured in more than 475 national and international exhibitions, including the 42nd Annual Delta Exhibition (1999) at the Arkansas Arts Center. His work can be found in notable private and public collections around the country. Among his public commissions are a fifteen-story mural commissioned by the Coca-Cola Company for the 1996 Centennial Olympic Games in Atlanta and a twenty-foot high by fifty-five feet long sculpture commission at Hartsfield-Jackson International Airport, Atlanta. Cole was inducted into the Arkansas Black Hall of Fame in 2018.

The artists selected to participate in the Delta this year are: