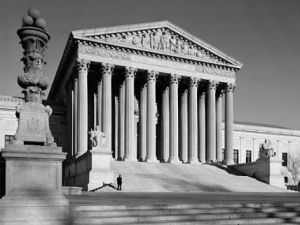 On May 17, 1954, the U.S. Supreme Court issued its ruling in Brown vs. Board of Education of Topeka.

This landmark United States Supreme Court case declared state laws establishing separate public schools for black and white students to be unconstitutional. The decision overturned 1896’s Plessy v. Ferguson decision, which allowed state-sponsored segregation in public education. In a unanimous 9-0 decision, the Warren Court stated “separate educational facilities are inherently unequal.”  The results of this decision would be tested on the streets of Little Rock in 1957.

The Court’s fourteen page decision did not spell out any sort of method for ending racial segregation in schools, and the Court’s second decision in Brown II, muddied the waters even further by only ordering states to desegregate with the oxymoronic “all deliberate speed.”

Brown v. Board grew out of a class action suit filed in Topeka, Kansas, by thirteen African American parents on behalf of their children.  Mr. Oliver Brown was the only male. He was chosen to be the lead plaintiff, because it was felt that the court would look more favorably on a male plaintiff.  The District Court ruled in favor of the Board of Education, citing Plessy v. Ferguson.  The court did note that segregation had a detrimental effect on African American students, but that since the Topeka schools were substantially equal, there was no relief to be granted.

When it was appealed to the Supreme Court, Brown v. Board was combined with four other cases from other jurisdictions.  All were NAACP sponsored cases.  Thurgood Marshall was the lead attorney for the plaintiffs.  In December 1952, the Justice Department filed a “friend of the court” brief and argued, in part, that racial segregation had a detrimental effect on US foreign policy. Communist countries were using racial separation in anti-US propaganda.

In the spring of 1953, the Supreme Court held the case.  Unable to decide the issue, they reheard it in the fall of 1953.  They then put special emphasis on the Fourteenth Amendment’s Equal Protection Clause.

Since the Topeka schools were found to be substantially equal, the Court’s ruling was important in noting that the harm came from the separation.  While there was no doubt that many (if not most) African American public schools were inferior in infrastructure and supplies to white schools – that in and of itself was not the issue.

School leaders in Little Rock started perusing the Brown decision and considering how the Little Rock School District would comply.