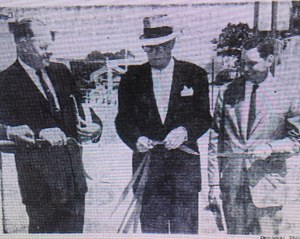 Knoop, Parkin and Remmel in this DEMOCRAT staff photo

On that day, Harry W. Parkin, a member of the Arkansas Highway Commission was joined by Little Rock Mayor Werner Knoop and Pratt Remmel, a former mayor of the city,  in a brief ceremony.

With Mayors Knoop and Remmel standing by, Mr. Parkin snipped the ribbon to officially mark the opening of LaHarpe Boulevard in Little Rock.  Owner of Parkin Printing Company in LR, he had been appointed  to the Highway Commission in 1957.

Mr. Knoop was the current mayor of the City, having been chosen by his colleagues on the initial City Board in November 1957. He was re-selected in January 1959 to a second stint as mayor.  Mr. Remmel had been mayor in 1952 when Little Rock voters approved bonds to pay for their portion of the $3million project.

In February 1957, the street was named in honor of the explorer Jean-Baptiste Benard de La Harpe, who had first claimed the area for the French.