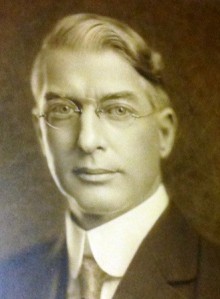 On June 8, 1873, future Little Rock Mayor Ben D. Brickhouse was born in Virginia.  He moved to Texas as a child before his family settled in Arkansas.

His first job was with the Missouri Pacific Railroad.  He eventually attended law school at the University of Arkansas.  As an attorney, he remained interested in labor relations throughout the rest of his life.

In 1914, Brickhouse was elected to the Little Rock City Council.  He was reelected in 1916.  In 1918, he was appointed Labor Commissioner for the State of Arkansas by Governor Charles Brough.

Brickhouse was elected Mayor of Little Rock in 1919.  He was relected twice (1921 and 1923). Though other Little Rock mayors in the 1920s to 1950s would seek a third consecutive term, Brickhouse was the last who succeeded prior to the change to the City Manager form of government in 1957.

Mayor Brickhouse ran for a fourth term as Mayor but was defeated.  In 1923, he had openly opposed the Ku Klux Klan, which was then a major player in Democratic politics in Little Rock, in Arkansas and in the nation. In the next Democratic primary for Mayor, Brickhouse did not secure the nomination.

During Mayor Brickhouse’s tenure the City purchased the land to make Fair Park (now War Memorial Park).  He also served as chair of the State Fairgrounds. After leaving office Brickhouse remained active in civic affairs, often speaking out in favor or opposition to local issues.

Brickhouse retired from public life in 1925 but returned in 1938 when he was elected to the Arkansas House of Representatives.  He was reelected in 1940.  On June 1, 1941, not long after the conclusion of the legislative session, Brickhouse died.