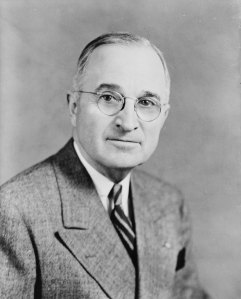 Outside of his capacity as President of the United States, Harry S. Truman visited Little Rock on June 10, 1949, for the annual reunion of the 35th Division, his World War I unit.  He was joined on this trip by members of Arkansas’ congressional delegation and his sister.

In all of his June 10th remarks, President Truman spoke of the hospitality he always enjoyed in Little Rock. He discussed visits he had made over the years, including a stay at the Hotel Marion while in Arkansas campaigning for Senator Hattie Caraway.

At the ball, he commented on how, as a Baptist, he had not learned how to dance.  He then joked that however he had picked up other habits which were perhaps not in keeping with his Baptist faith.

At one event, President Truman asked all in attendance to shake hands with their neighbors as a way to shake his hand by proxy.  He explained that on inauguration day, he had shaken over 25,000 hands. Given the fact that he signed 600 documents a day, regardless whether he was in Washington or not, he felt he could not keep up with shaking hands all day.

As he concluded the day, he previewed that he would be giving a national address the next day while in Little Rock.  In his usual, self-deprecating way, Truman remarked “…if you want to hear the President of the United States you had better come out to the stadium tomorrow, and I will tell you something that will be good for your souls.”

The texts of all of his remarks while in Little Rock can be found here.