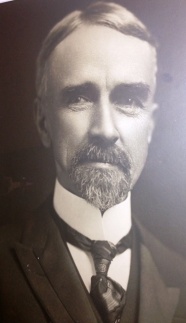 On August 4, 1834, future Little Rock Mayor William G. Whipple was born in Connecticut.  He attended school in Massachusetts and graduated from Wesleyan University. After studying law at Albany Law School, he moved to Milwaukee, Wisconsin.

In 1868, Whipple moved to Little Rock following the 1866 death of his first wife in Wisconsin. Long active in Republican politics, he quickly became involved in Little Rock’s political and social life.  Shortly after his arrival he was appointed United States Attorney and served three years.

In 1870, he married Mary S. Dodge, daughter of former mayor Roderick Lathrop Dodge MD.  They had one son Durand, who followed his father into the legal profession. The Whipples were active members of Trinity Episcopal Cathedral.

In 1887, Whipple was elected Mayor of Little Rock and was re-elected two years later.  Whipple’s mayoral administration introduced electric lighting to the city beginning on September 1, 1887, paved many streets with granite and macadam, created sixty miles of new brick and concrete sidewalks, and introduced a steam dummy railway.

In 1892, he ran for Governor of Arkansas as the Republican nominee but was unsuccessful.  In 1895, he sought a third term for Mayor but was defeated by James A. Woodson.

From 1897 to 1900, he served as register of the US Land Office in Arkansas.  Whipple, who had long practiced law, was appointed United States Attorney for the Eastern District of Arkansas in 1900.  He served in that capacity until 1913.

In July 1914, Mayor Whipple died.  He is buried at Oakland Cemetery in Little Rock.