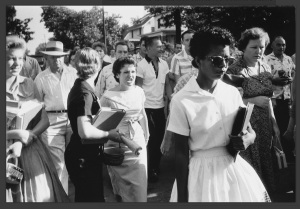 On September 4, 1957, the students known as the Little Rock Nine made their first attempt to enter all-white Little Rock Central High School.

This was the second day of the 1957-58 school year in Little Rock. Over the preceding Labor Day weekend, it had been decided that the African American students would wait until the second day of school to officially start at Central.

As is now well known, NAACP leader Daisy Bates was not able to notify one of the students about meeting as a group of the Bates house.  That one student, Elizabeth Eckford, approached the school by herself and quickly realized the National Guard members surrounding the school were not their to protect her, but to ban her and the others.

Arkansas Democrat photographer Will Counts captured Eckford’s quiet determination in the face of the guards and the taunting crowds.  His photo of a white student screaming at Eckford was picked up by media outlets worldwide. It became not only a symbol for the Central High integration crisis, but for the Civil Rights movement.  Counts’ photo was the jury’s choice for the Pulitzer Prize in Photography in 1958. But the jury was overruled by the Pulitzer board, with no explanation given.