October is Arts and Humanities Month nationally and in Little Rock. Americans for the Arts has identified a different arts topic to be posted for each day in the month. Today’s focus is Street Art.

While Jason Jones’s mural is not technically street art (in that it was authorized to be painted on the side of the building), it still presents art in an unexpected location. 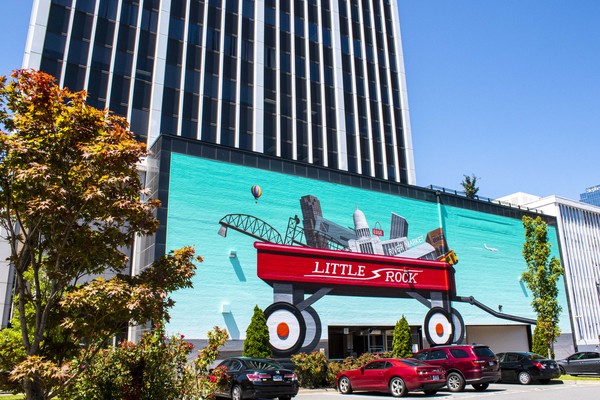 The Downtown Little Rock Partnership commissioned this mural as part of their ongoing effort to add art to downtown.  After the dedication of this mural during the summer of 2019, the DLRP has issued calls for artists for several other locations in downtown Little Rock.

Playtime, Jones’s mural, depicts many features of downtown Little Rock in the playful setting of a child’s red wagon.  This 5,000 square foot mural attracted proposals from over 70 artists for the $30,000 commission.