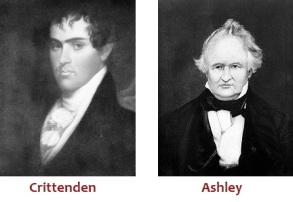 On November 1, 1820, Robert Crittenden and Chester Ashley signed an agreement to form a “Partnership in the Practice of Law.”  This document is the genesis for what is now known as the Rose Law Firm, the oldest law firm west of the Mississippi River.

Crittenden and Ashley were both political leaders.  At the age of 22, Crittenden was appointed Lieutenant Governor of Arkansas Territory by President James Monroe.  Ashley would serve as a U.S. Senator from Arkansas from 1844 to 1848.  His son William E. Ashley was the first Little Rock mayor to be born in Little Rock.

Both Crittenden and Ashley have counties in Arkansas named in their memory.  In addition both Chester and Ashley streets in Little Rock are named for the latter.

In 1832, Crittenden and Ashley dissolved their partnership, though each continued practicing law.  George Watkins joined Mr. Ashley in 1837.  By 1865, U.M. Rose joined partnership. The name Rose has been in the firm’s name ever since.