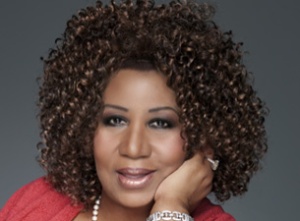 On November 16, 2004, the rafters of Robinson Center Music Hall were shaken by the vocal prowess of Aretha Franklin.

She shared the Robinson stage with the Arkansas Symphony Orchestra.  The ASO brought Miss Franklin to town as part of the festivities surrounding the opening of the presidential library.  Long a favorite of the Clintons, Miss Franklin sang at his 1993 inaugural festivities the night before he took the oath of office.

Resplendent in a series of white dresses, Miss Franklin was in top form feeding off the love from the audience.  While backstage she may have been dealing with back and knee issues (which the Culture Vulture saw first hand), when she stepped on to the stage she was giving her all as she rolled through hit after hit from her starry career.  She sang, she played the piano, she entertained!

It was a sold out house and her voice and energy reached the last row of the balcony.

Prior to her appearance, the ASO played a few selections including variations on “Hail to the Chief” and “America.”

Earlier in the day, I had the privilege of picking up several copies of Bill Clinton’s autobiography for her to get signed by him.  I delivered them to her as she was resting between rehearsals. She was preparing for an interview with Craig O’Neill, and I hated disturbing her. But I wanted to be sure she got the books.  She was gracious and very appreciative.