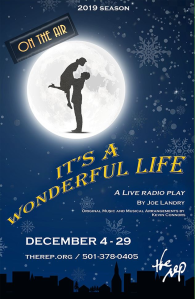 After two days of previews, the production opens tonight (December 6) and runs through December 29.

Back by popular demand, this holiday classic returns to The Rep’s stage to close the 2019 season. (It was last on the Rep’s stage in 2008.)

Ring in the holidays with an entertaining spin on a familiar holiday favorite. Set in a 1940s radio station on Christmas Eve, enjoy a live radio version of Frank Capra’s classic 1946 film as the actors on stage transform into dozens of characters from Bedford Falls. Faced with the threat of scandal and financial ruin, George Bailey experiences a crisis of faith and wishes he had never been born. Divine intervention arrives in the form of Clarence (Angel Second Class), who is on a mission to restore George’s will to live… and earn his own wings in the process. Every life impacts countless others, whether we know it or not.

The production is directed by Giovanna Sardelli (whose most recent Arkansas Rep production was The School for Lies). The design team includes Jo Winiarski (set), Sarah Nietfeld (costumes), Jamie Roderick (lighting), and Jane Shaw (sound). The cast includes the return of Larry Daggett and Patrick Halley along with Alan Dronek, Larissa Klinger and Mary Murphy making their Arkansas Rep debuts.