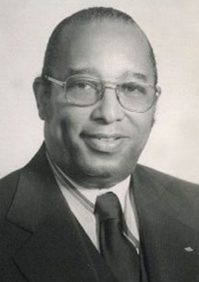 101 years ago future Little Rock Mayor Charles Bussey was born in Stamps on December 18, 1918.  He would spend his adult life in Little Rock after college and World War II service.

Apparently, while campaigning in 1968, he deliberately went into the Arkansas headquarters of segregationist presidential candidate George Wallace to see about leaving campaign literature. A hulking man with a broad smile, he shocked the young receptionist. He was undoubtedly the first (and probably last) African American to enter that campaign headquarters.

He served from 1969-1977 and again from 1979 through 1991. In 1981 he was selected by his fellow City Directors to serve as Little Rock’s Mayor, which made him the first African American Mayor of Little Rock. He served as Assistant Mayor of Little Rock for a total of 8.5 years which is the longest of anyone in the City’s history.

Throughout his lifetime Mayor Bussey championed youth outreach efforts. He also was active in the Arkansas Municipal League, National League of Cities, West Little Rock Rotary Club, Elks, Shriners and many other organizations.

In 2006 he was posthumously inducted into the Arkansas Black Hall of Fame. The previous year, 20th Street in Little Rock was renamed in his honor. In 2015 he was included in the Arkansas Civil Rights Heritage Trail.

At the 2005 street naming ceremony, the following remarks about Mayor Bussey were made:

Little Rock Mayor Jim Dailey (who was mayor in 2005 and had served on the City Board of Directors with Bussey)  “Charlie’s heart was in this City, so it is fitting that this street bearing his name goes right through the heart of Little Rock. Especially in those early days on the Board, even before I served with him, African-Americans were really struggling to be involved.  He helped so many people to be involved in Little Rock and the entire state.”

Johnnie Pugh, who was City Director for Ward 1 at the time noted: “He certainly made Little Rock a better place for children and youths.  Those that he touched have grown up and continued to be engaged in making the City a better place for everyone.”

In a letter written by former Mayor Lottie Shackelford, Bussey was described as “a first class dresser who spent much of his working life in and around City Hall.  He was a man always on the move who worked to make Little Rock a first class city.”

The late Myra Jones, a former State Representative and LR City Director, served as Assistant Mayor when Bussey was Mayor.  She remembered Bussey “would tell me who to see, but never tell me what the purpose was.  That was for me to discover; and in so doing, it made me a better Director.”