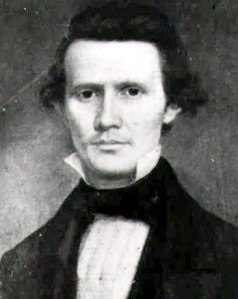 Future Little Rock Mayor John Josephus McAlmont was born on this date in 1821 in New York state. (Various reports give his birth date as December 22 — but the family reports December 19 as the date.)

After studying medicine in Pennsylvania and Ohio, he arrived in Little Rock in March 1850 with his family.  He first practiced medicine in nearby Benton, before returning to Little Rock in 1852.  In addition to being a physician, he was a pharmacist.

In October 1879, he and seven other physicians founded the Arkansas Industrial University Medical Department in Little Rock. This institution has grown into the University of Arkansas for Medical Sciences.  He served on the faculty of the medical school for several years.

Dr. McAlmont died in September 1896.  He is buried at Mount Holly Cemetery.  In addition to the McAlmont community bearing his name, there is a McAlmont street in downtown Little Rock which was named in his memory.