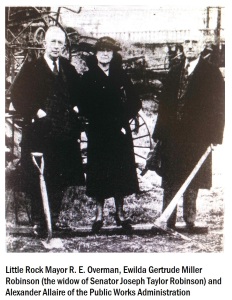 That morning, the Arkansas Gazette ran a brief story on the upcoming groundbreaking.  The story mentioned that the building would be named in memory of the late beloved Arkansas politician.  This appears to be the first public pronouncement of the Robinson name for this civic structure.

Among others in attendance at the groundbreaking were Mrs. Charles Miller (sister-in-law of Mrs. Robinson), Mr. and Mrs. Grady Miller (brother and sister-in-law of Mrs. Robinson), the mayor’s wife, the three architects (George Wittenberg, Lawson Delony and Eugene John Stern), and D. H. Daugherty and Will Terry of the City’s Board of Public Affairs.

Construction had to start by January 1, 1938, in order to receive PWA funds.  By breaking ground on December 24, there was over a week to spare.  The site had been selected in late October 1937, and the purchase had not been finalized.  But the PWA did give permission for the City to let a contract for excavation, demolition and filling on the site.

The groundbreaking took place at the corner of Garland and Spring Streets which was on the northeast corner of the block set aside for the auditorium.  Today, Spring Street does not extend north of Markham; the street was closed to make way for the parking structure and what is now the Doubletree Hotel.  That section of Garland Street is basically an alley that runs parallel to Markham north of City Hall, Robinson Auditorium and the Doubletree Hotel.