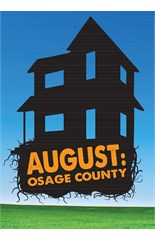 The Arkansas Repertory Theatre works in partnership with the Clinton School of Public Service to participate in the UACS’s Distinguished Speaker Series, hosting educational panel discussions on various Rep productions.

The latest in these takes place today, Thursday, June 4 at 12 noon at Sturgis Hall in Clinton Presidential Park.  It focuses on the Rep’s upcoming production of Tracy Letts’ August: Osage County.

The play focuses around the large Weston family when they unexpected reunite after dad disappears and their Oklahoman family homestead explodes in a maelstrom of repressed truths and unsettling secrets. Mix in Violet, the drugged-up, scathingly acidic matriarch, and you’ve got a major new play that unflinchingly – and uproariously – exposes the dark side of the Midwestern American family.