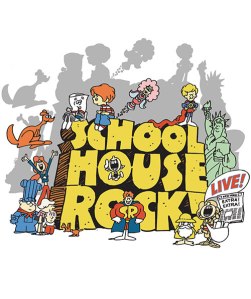 The Schoolhouse Rock cartoon may be decades old now, but this fresh, live-theatre adaptation will spark the wide-eyed wonder of new discovery in our youngest generation while inviting smiles of toe-tapping, lip-synching nostalgia from the rest of us. Get ready to relive those fun-filled afternoons in front of the TV; Schoolhouse Rock Live! is coming to the Arkansas Arts Center Children’s Theatre March 4-25.

From “Just a Bill,” “Conjunction Junction,”  “Interplanet Janet” and more, every song in this live musical performance of the classic, Emmy Award-winning cartoon series “Schoolhouse Rock” is sure to please.  With performances Fridays at 7 p.m., Saturdays and Sundays at 2 p.m., March 4-25, and 2 p.m. matinee performances March 22-25, there are plenty of opportunities to see this show which makes learning grammar, science, math and history a delight!

Schoolhouse Rock and the accompany play have strong ties to Arkansas. Robert Dorough, born in Cherry Hill, Ark., wrote and performed many of the original songs for the cartoon and the play. Scott Ferguson is the original director and author of Schoolhouse Rock Live! Not only is he a native of Sherwood,, but he is also an alumnus of the Arkansas Arts Center Children’s Theatre.

Get ready for the ultimate Throwback Thursday event with Schoolhouse on the Rocks—an adults-only singalong performance of Schoolhouse Rock Live! on Thursday, March 10. Before the play, enjoy a reception at 6 p.m. featuring themed cocktails, a cereal and Hiland Dairy milk bar with some of your favorite breakfast treats and a grownup spin on other classic childhood snacks. Tickets are $10 for members, $20 for non-members and include the reception and ticket to the show.

The Arkansas Arts Center Children’s Theatre will once again offer “Pay What You Can” preview performances. “Pay What You Can” tickets are available for the 7 p.m. Thursday preview performance of each Main Stage production. Tickets for the Schoolhouse Rock Live! preview on Thursday, March 3 must be purchased in person at the Arkansas Arts Center (501 East 9th Street) from 10 a.m. – 5 p.m. at the Stephens Inc. Visitors Center, or from 6-6:45 p.m. at the Children’s Theatre Box Office, Lower Lobby Level. The maximum ticket purchase of six tickets per person. Additional tickets can always be purchased in person, online or by phone at regular ticket pricing.

Best enjoyed by all ages.

For more information and to purchase tickets, visit ArkansasArtsCenter.org/theatre.