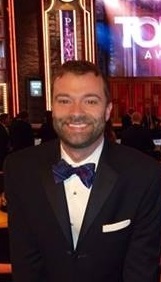 The Tony Awards nominations were announced today.  Little Rock native Will Trice picked up his eighth nomination as a Broadway producer with year’s nod for the revival of Fiddler on the Roof.

Trice has earned previous Tony nominations for producing the plays All The Way* and Wolf Hall; play revivals The Best Man, The Glass Menagerie, Who’s Afraid of Virginia Woolf?*, and You Can’t Take It With You; and the musical revival Porgy and Bess*.  (An * indicates a Tony win.)

This season, Trice was a producer of four different shows: Sylvia with Matthew Broderick and Annaleigh Ashford; China Doll with Al Pacino; Fiddler on the Roof with Danny Burstein, Jessica Hecht and Ben Rappaport; and American Psycho with Benjamin Walker and Alice Ripley.