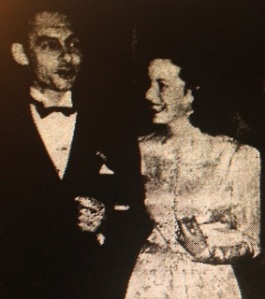 As final preparations were being made for the opening of the Joseph Taylor Robinson Municipal Auditorium in early 1940, a glamorous evening took place in Robinson’s lower level convention hall on February 1.

In conjunction with a meeting of film executives and movie theatre owners sponsored by Robb and Rowley Theaters (which later became the United Artists theatre chain), several Hollywood actors were in Little Rock and headlined a Movie Ball. While in Little Rock, Maureen O’Hara, Phyllis Brooks, Arleen Whelan, Tim Holt and Gene Autry had also made a variety of public appearances.

Mr. Autrey had to miss the ball because he had to return to Hollywood early to attend to business matters. Actress Ilona Massey had also been scheduled to attend the events but was unable due to illness.

Though it is unknown as to whether he sought an autograph, photos from the evening showed a very satisfied Mayor Satterfield with Miss O’Hara on his arm. Satterfield family lore joked that Mrs. Satterfield (who had stayed home that night to tend to a sick son) was not a fan of Miss O’Hara’s films after that evening.

The Movie Ball showed Little Rock citizens the value of Robinson Auditorium even before it had been officially dedicated. The film industry meetings had taken place at the Albert Pike Hotel which did not feature a ballroom large enough to host the ball. Without the auditorium’s availability for the gala, organizers might not have chosen Little Rock for the meeting.

With the auditorium’s convention hall not attached to any hotel, it opened up the chance for Little Rock to host more events. This had been one of the key arguments for an auditorium since Mayor W. E. Lenon’s first proposal back in 1904. Having a glamorous event this early in the auditorium’s life validated that contention. After having endured the challenges to open the building, it was a nice lagniappe for the auditorium’s proponents who were present.

The actor Tim Holt would again be connected to Little Rock. In September 1951, he tried to obtain a divorce in Arkansas and stated that he had been a resident of the state for at least six weeks. He also had someone else testify to that fact. In October 1951, the divorce was granted. Later Mr. Holt was charged with perjury and fined $200 for falsely representing his length of residence in Arkansas. Judicial sanctions for his legal team, which included a State Senator, were eventually reviewed by the Arkansas Supreme Court.