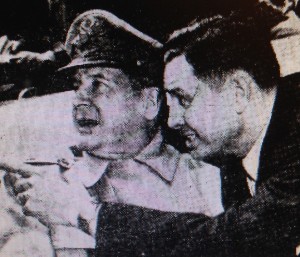 On Sunday, March 23, 1952, General Douglas MacArthur made his only post-infancy visit to Little Rock. He had previously been scheduled to visit Mississippi, and Little Rock Mayor Pratt Remmel had persuaded him to add a visit to Little Rock to the agenda. The fact that Little Rock now had a Republican mayor had apparently piqued the General’s interest.

General MacArthur, accompanied by his wife and son as well as several journalists and members of his military retinue, arrived at Little Rock Airport at 10:40 am. He was met by a delegation of civic leaders including Mayor Remmel. Alderman James Griffey made welcoming remarks on behalf of the city. Then the General and Mayor boarded an open car and led a motorcade from the airport to downtown.

The motorcade’s destination was Christ Episcopal Church at Capitol and Scott streets. It was at this church that MacArthur had been baptized as an infant. The delegation was greeted by the Episcopal Bishop R. Bland Mitchell, Rector J. Hodge Alves, and Rector Emeritus W. P. Witsell. (While he had been Rector, Dr. Witsell had garnered national attention by issuing an Easter blessing to Gen. MacArthur as he had been evacuating the Philippines at the height of World War II.) In order to gain admittance to the church that morning, church members and guests had to have tickets.

Following the worship service, the General and his party went to three events in the park named in his honor. The first was a tour of the Museum of Natural History (now the Museum of Discovery and located in the River Market; the current tenant of the building is the MacArthur Museum of Arkansas Military History), which was located in the building in which the General had been born. After the tour, he spoke at a dedication of a small rose garden adjacent to the museum. It was sponsored by the Little Rock City Beautiful Commission and the Garden Clubs of Greater Little Rock.

Though every stop of the General’s visit had featured crowds, the largest was at the third location in MacArthur Park. A crowd of several thousand greeted the General as he spoke from the Foster Bandshell in the park’s southwest corner. Chamber of Commerce president Richard C. Butler (brother-in-law of Mayor Remmel) was the master of ceremonies. Following an invocation by Methodist Bishop Paul Martin, the only other speaker was the General. In his remarks he spoke of his Southern heritage and of his appreciation for the support of the citizens of Little Rock over the years.

Several gifts were bestowed upon the MacArthurs at the ceremony. The City of Little Rock presented Mrs. MacArthur with an engraved silver serving tray.

Following the events in MacArthur Park, the family retired for a brief respite to the Hotel Marion. They then attended a luncheon buffet in their honor at the home of Howard and Elsie Stebbins on Edgehill Road. The General and Mrs. MacArthur circulated through the house greeting guests and then eschewed a special table in favor of balancing their plates on their laps and sitting in wingback chairs. Meanwhile Arthur MacArthur stayed upstairs and discussed stamp collecting and other hobbies with the Stebbins’ two teenage sons.

Following the luncheon, the MacArthur party went back to the airport and by 4:00pm, the plane was in the air.

Though this visit was coming at the end of a whirlwind of activities, by all accounts, the General and Mrs. MacArthur were very gracious and accommodating. The General was being mentioned as a potential GOP candidate for President, but purposefully steered clear of any political comments in his remarks. He and Mrs. MacArthur dutifully posed for photos not only for the media but also for amateur photographers. At lunch, the General even asked a Gazettephotographer to take a photo of him with his Little Rock Police motorcycle escorts so that they could have a souvenir of the visit.