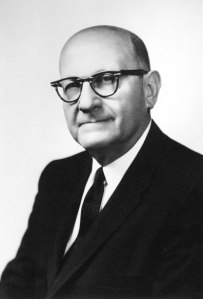 On May 6, 1894, Ira Eugene Sanders was born in Missouri.  After receiving an undergraduate degree and rabbinate degree in Cincinnati, he was ordained a rabbi in 1919.  He served congregations in Pennsylvania and New York before coming to Little Rock in September 1926.

Shortly after arriving to lead the B’nai Israel congregation, Rabbi Sanders became active in the Little Rock community.  Among his projects were the Little Rock Community Fund, Little Rock School of Social Work (which he founded), Central Council of Social Agencies, and University of Arkansas Extension Department. During the Great Depression, he helped organize the Pulaski County Public Welfare Commission.  Other areas of involvement over his career included the Arkansas Human Betterment League, Urban League of Greater Little Rock and Arkansas Lighthouse for the Blind.  On November 3, 1930, Rabbi Sanders debated Clarence Darrow about the existence of God in front of a packed house at Little Rock High School.

A lifelong supporter of a Jewish state, he participated in nineteen bond drives for the state of Israel.  In August 1963, he retired as the leader of B’nai Israel after over 35 years. He would remain as Rabbi Emeritus until his deal in 1985.

In January 1978, Rabbi Sanders tendered his resignation from the Central Arkansas Library board of directors.  The City Board of Directors passed resolution 5873 which noted that he had served for 51 years on the Library Board. He was first appointed in 1926.  He served during 19 different Mayoral administrations from Charles Moyer’s first term through Donald Mehlburger’s.

On April 8, 1985, Rabbi Ira Eugene Sanders died of natural causes.  He is buried in the City’s Oakland Jewish Cemetery.  The Central Arkansas Library System honors his memory with an annual distinguished lecture series.