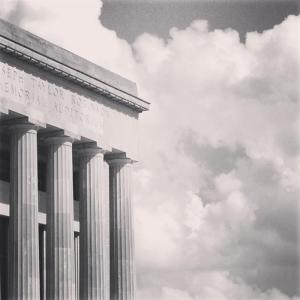 Eighty years ago today, on June 1, 1939, the cornice was installed on Robinson Auditorium.

This granite slab noted the name of the building as the Joseph Taylor Robinson Memorial Auditorium.  (It is interesting to note that it used the more modern “u” instead of the classical “v” which was often used in buildings during prior decades – as evidenced by the Pvlaski Covnty Covrt Hovse across the street.)

June 1, 1939, was also the first day on the job for the auditorium’s first director – William T. Clemons.  A former Little Rock resident who came from Rochester NY.  The Auditorium Commission which hired him would not disclose the sources of his salary, but assured Mayor J. V. Satterfield the money did not come from City coffers.

On this date in 2015 and 2016, the cornice was again surrounded by construction materials and braces. But the restoration of Robinson Center finished in November 2016. Once again, the cornice stands proudly atop the six columns with no impediments around it.