Many months behind schedule, it was 80 years ago today (December 8, 1939) that the construction of the Joseph Taylor Robinson Memorial Auditorium was declared “substantially finished.”

Though there were still unfinished portions of the structure, the exterior was complete and finished surfaces had been installed on the interior. Until the building was officially turned over to the City, the federal Public Works Administration still had to give approval for any uses of the building.Mayor J. V. Satterfield, Jr. told the press that he wasn’t sure when the City would formally accept the building. The connection of the utilities had used up the remaining funds, so there was uncertainty as to when the final tasks would be completed.

When it was built, Robinson Auditorium was the first municipal auditorium in the south central United States to be air conditioned. However, the air conditioning unit was not sufficient to cool both the music hall and the convention hall at the same time. In warm weather months concurrent events would not be able to take place on the two levels.

The Pulaski County Courthouse where the 12 Little Rock aldermen were arraigned.

On Monday, December 4, 1939, a dozen of Little Rock’s aldermen reported to the county jail to serve sentences for contempt of court.

The previous Monday, the twelve council members had voted against an ordinance which had been ordered by the judge in an improvement district matter.  The other aldermen had either voted in the affirmative or had been absent.  Because the twelve had refused to change their votes since that meeting, the judge ordered them jailed.

At the hearing, the judge brought each alderman up one by one. This seemed to be in order to further embarrass the aldermen.  The judge also interviewed Mayor J. V. Satterfield and City Clerk H. C. “Sport” Graham to put on the record that they had counseled the aldermen to obey the judge’s order.

Mrs. C. C. Conner, the only female alderman, was not jailed but was fined $50. The eleven men were held at the jail, though not in cells.  Newspaper photos showed the men playing cards in a conference room.  In order to get out of jail, the judge gave the aldermen the chance to change their votes.

Mayor J. V. Satterfield plead with the judge to let the aldermen leave the jail to attend the meeting at City Hall, which was nearby.  He requested that the city be allowed to maintain “what little dignity remained” by not having the meeting at the jail.  The judge relented, and the aldermen were escorted by deputies to the council chambers.

After the aldermen changed their votes, the judge suspended the remainder of their sentences.  The sentences were not vacated, they were only suspended.  The judge admonished them that should they attempt to reverse their reversal, he would throw them back in jail. 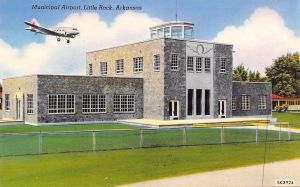 Adams left the City Council in April 1937.  Five months later, he was killed in a freak accident when a propeller assembly exploded and sent the propeller careening toward him.

Adams’ family was present at the ceremony on November 11, 1941.  The fact that it was on Armistice Day was no accident.  Little did few realize that US would be plunged into a second world war just a few weeks later.

Top executives from American Airlines came to Little Rock to participate in the festivities.  Others coming to town included members of Arkansas’ congressional delegation.  New Mayor Charles Moyer shared credit for the building with former Mayor J. V. Satterfield who had led the project for most of the time.  (Satterfield would later be the first chairman of the Airport Commission in 1951.) Hundreds turned out for the ceremony.  While they were in town, the congressional delegation and American Airlines executives made the most of interest in them and spoke to various civic clubs and banquets.  They extolled the virtues of airflight and the aircraft industry.

On a personal note:  the terminal building was built by E. J. Carter, a great uncle of the Culture Vulture. 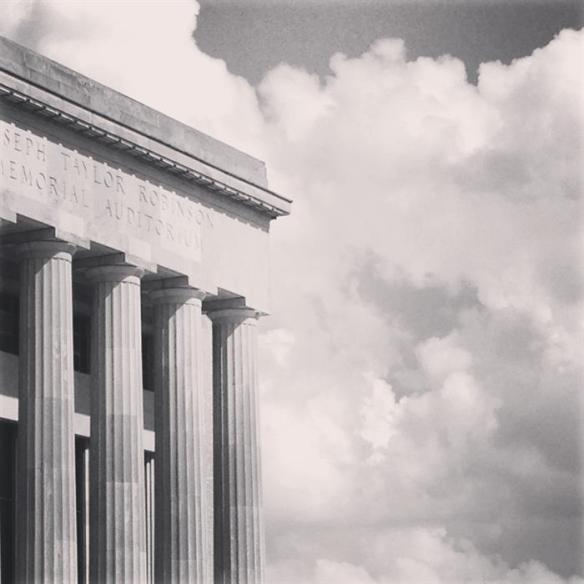 October is Arts and Humanities Month nationally and in Little Rock. Americans for the Arts has identified a different arts topic to be posted for each day in the month.  Next up is a topic called simply “Inspired by….”

Many things, events, people, and occurrences have inspired me.  But the architecture, history, and artistic & historic events from Joseph Taylor Robinson Memorial Auditorium (now known as Robinson Center performance Hall) may collectively have inspired me the most.

It has been the resident home of the Arkansas Symphony Orchestra since 1973 and hosted Ballet Arkansas’ The Nutrcracker for 40 years.  Touring Broadway shows and concerts come through on a regular basis.

It was the site of a memorial service for Daisy Bates. It was NOT the site of a Duke Ellington concert in 1961 because administrators refused to desegregate the facility. (He had previously played there in the 1950s). After a lawsuit, the national tour of Hair played there. Presidents Truman, Eisenhower, Clinton, and Bush 43 spoke at the building. Buzz Aldrin held court discussing his trip to the moon and his desire to see the US go to Mars.  George Takei held the audience in rapt silence as he detailed his experiences as a child in a Japanese internment camp in Arkansas.  Elvis’ first recorded version of “Hound Dog” took place in this building.  Jesse Belvin’s final concert was in this building.

The architecture by Lawson Delony and George Wittenberg working with Eugene Stern combines neoclassical elements with Art Deco elements and good, old fashioned New Deal sensibilities. In 2014, Ennead Architects working with Polk Stanley Wilcox led a top to bottom reinvention of the space which brought the performance spaces into the 21st Century while also restoring much of the original 1940 decor which had been decimated in an early 1970s renovation.

This building was the culmination of an effort which started in the 1890s to create a municipal auditorium for Little Rock. Many Little Rock leaders worked on that effort for decades.  Once New Deal funding made the project possible, the drama did not end. Construction funds ran out and Mayor J. V. Satterfield, Jr., had to use innovative financing methods to get the building completed. This February Robinson will turn 80.

While Senator Robinson had nothing to do with the project, as the state’s senior U.S. Senator, he certainly was involved in giving approval to it. After his death in the summer of 1937 it was announced in December 1937 the building would be named in his memory.  Nearly 80 years later it still stands as a testament not only to him, but to the tens of thousands of performers who have been on its stage. 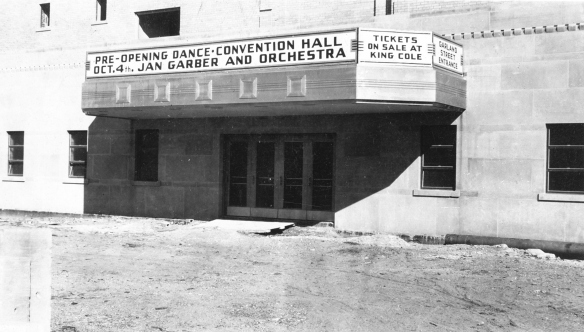 In October 1939, it looked as if Robinson Auditorium would never open.  The construction had run out of money.  But in an effort to generate a little revenue and give the public the chance to see the building, a few events were booked in the lower level.

At the time, the entrance to the lower level was off of Garland Street which ran to the north of the structure.

While Mayor J. V. Satterfield and other leaders were in Washington seeking additional funding, the Joseph Taylor Robinson Memorial Auditorium hosted its first event.  On October 4, 1939, the convention hall on the lower level was the site of a preview dance.  The pecan block flooring had been installed just the week before.

The first four people to enter the building as paying guests were Mr. and Mrs. Alfred Wilheim, Frances Frazier and Bill Christian.  Reports estimated 3,200 people attended and danced to the music of Jan Garber and His Orchestra.

By happenstance, Garber and his musicians had also played in Little Rock on January 26, 1937, the date of the election which approved the auditorium bonds.  Since Little Rock then did not have a suitable space, that appearance had been on the stage of the high school auditorium.

The dance was a success.  But as the building had no heating or cooling mechanism at the time, there were limits as to how long even the lower level could be in use.  After a few weeks, the PWA, which was still in charge of the construction site, halted all future bookings.

Eighty years ago today, on June 1, 1939, the cornice was installed on Robinson Auditorium.

This granite slab noted the name of the building as the Joseph Taylor Robinson Memorial Auditorium.  (It is interesting to note that it used the more modern “u” instead of the classical “v” which was often used in buildings during prior decades – as evidenced by the Pvlaski Covnty Covrt Hovse across the street.)

June 1, 1939, was also the first day on the job for the auditorium’s first director – William T. Clemons.  A former Little Rock resident who came from Rochester NY.  The Auditorium Commission which hired him would not disclose the sources of his salary, but assured Mayor J. V. Satterfield the money did not come from City coffers.

On this date in 2015 and 2016, the cornice was again surrounded by construction materials and braces. But the restoration of Robinson Center finished in November 2016. Once again, the cornice stands proudly atop the six columns with no impediments around it.

On May 14, 1902, future Little Rock Mayor John Vines Satterfield, Jr. was born in Marion.   He grew up in Little Rock and Earle. J.V. was a star quarterback for the Earle football team and is featured in a painting of that team by respected painter Carroll Cloar.

Following high school, J.V. taught (including, much to his family’s amusement, a course in penmanship) and coached and sold Fords.  He then moved to Little Rock and sold insurance and later securities.  In 1931 he opened his own business; that same year he built a house at 40 Beverly Place in Little Rock, which would serve as his home until his death.

J. V. Satterfield was elected to serve as Mayor of Little Rock in 1939 and served one term, until 1941.  He was credited with saving the City from bankruptcy because of his fiscal policies. Among his efficiencies were the creation of a central purchasing office and using grass moved from the airport to feed the Zoo animals.

Though as a private citizen he had voted against the creation of a municipal auditorium in 1937, Mayor Satterfield fought valiantly to ensure that Robinson Auditorium opened to the public once he took office.  Shortly after he became Mayor, it was discovered that there were not sufficient funds to finish the construction. After the federal government refused to put in more money, he was able to negotiate with some of the contractors to arrange for the building to be completed. He also oversaw a successful special election to raise the money to finish the project.

Satterfield was a staunch supporter of the airport and worked to expand it.  He would serve as the chair of the first Municipal Airport Commission.  He also established the Little Rock Housing Authority (on which he would later serve on the board).  Mayor Satterfield also served as President of the Arkansas Municipal League in 1941.

Following the outbreak of World War II, Satterfield enlisted in the Army and was given the rank of a Major. He later was promoted to a Colonel and worked in the Pentagon during its early days.

In the late 1940s Satterfield became president of a small Little Rock bank called People’s Bank.  The bank changed its named to First National Bank when it moved into new offices at 3rd and Louisiana in 1953.  By focusing on smaller customers and courting corporate customers, Satterfield grew the bank into one of the state’s largest banks.  He maintained his desk in the lobby of the bank so he could interact with the customers and ensure they were having a positive experience.

Due to chronic health issues, Satterfield retired from the bank in 1964. He died in March 1966.