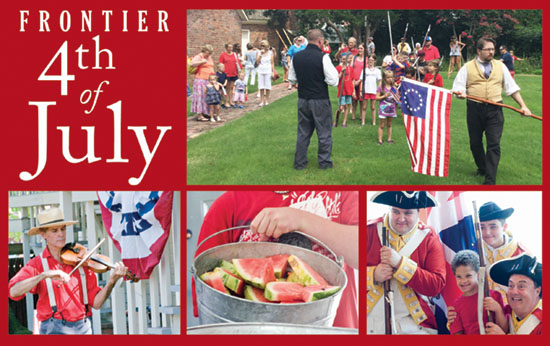 Huzzah! This year celebrate Independence Day as it was celebrated on the Arkansas frontier. The morning activities include an old-time patriotic parade, 19th century music, a traditional reading of The Declaration of Independence (by Congressman French Hill) stirred on by “huzzahs” and other cheers, and “make and take” craft activities for kids.

Events are from 10am until 12noon at Historic Arkansas Museum.

Cool off with ice-cold lemonade, watermelon, and ice cream. And for a little anachronistic fun, you can watch a Revolutionary War battle reenactment with Red Coats and Patriots at the museum’s farmstead.

Children will be invited to walk on stilts, join a sack race, and play other pioneer games. They will also have the opportunity to create flags, streamers, and signs to use in the parade.

Complimentary refreshments will be provided, including watermelon lemonade and Loblolly Creamery ice cream!