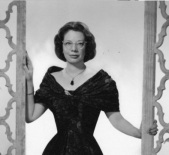 Jeannette Edris Rockefeller only lived in Arkansas for about fifteen years. But her impact on the cultural life of Little Rock and all of Arkansas continues to be felt today.

Born on July 13, 1918, and raised in Seattle, as a young mother she met Winthrop Rockefeller while both were in New York.  He moved to Arkansas in 1953; after their 1956 marriage, she joined him. They split their time between Little Rock and Petit Jean.

In 1959, she was asked to become involved in plans for a new art museum in Little Rock.  She became a tireless advocate and fundraiser for the new Arkansas Arts Center.   In 1960, she assumed the role of president of the Arkansas Arts Center Board of Trustees, a position she held until 1968.  During that time period she oversaw the planning, construction and opening of the building.  She also invited Townsend Wolfe, who she had met when he taught some classes at the Arts Center, to apply to become the museum’s first executive director.

From 1967 to 1971, she was First Lady of Arkansas.  In that capacity, she supervised renovation of the Governor’s Mansion and started the tradition of displaying art on the walls.