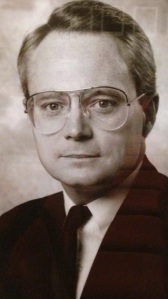 Future Little Rock Mayor Tom Prince was born on August 13, 1949.  After graduating high school in 1967 (where he was on the state championship golf team), he attended the United States Naval Academy.  He later received his law degree from the University of Arkansas at Little Rock and began practicing law in Little Rock.

In 1984 he ran for the City of Little Rock Board of Directors and was elected.  In January 1985, he was selected by his fellow City Directors to serve as Mayor of Little Rock.  He served as Mayor until January 1987.  During his term in office, Arkansas celebrated its Sesquicentennial. Mayor Prince oversaw the City’s participation in the celebratory activities.  As Mayor he was also a strong advocate for expanding the city’s involvement in quality of life issues through enhanced parks and arts while maintaining a commitment to public safety and public works issues. After the completion of his four year term on the City Board, he did not seek a second term.

City of Little Rock races are non-partisan.  After leaving office, he became involved in Democratic Party politics.  In 1992, he campaigned for Bill Clinton’s presidential bid in Iowa and other Midwest states.  When his law partner, Sheffield Nelson, ran for Governor in 1994 as a Republican, Prince resigned from his Democratic Party positions and worked on the Nelson campaign.  In 1997, he was elected chair of the Pulaski County Republican Committee.  In 1998, he ran for the United States Senate as a Republican.

In 1999, Prince experienced a family tragedy and took a sabbatical from practicing law. In 2000, he moved to St. Louis to become general counsel for a securities firm located there.  Following several years with the securities firm, he joined a St. Louis law firm in private practice.  After spending over a decade in St. Louis, Prince returned to Central Arkansas and is managing business interests.