The Arkansas Cinema Society’s Filmland concludes with a double bill of works directed by Andrew Stanton. 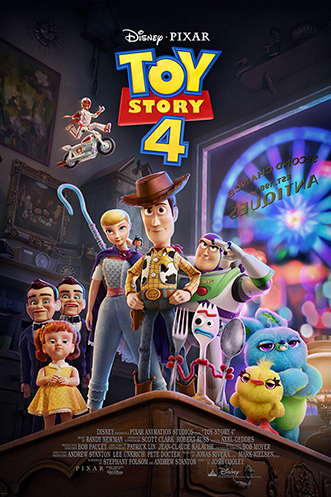 Up first is Disney Pixar’s Toy Story 4.  Woody, Buzz Lightyear, Bo Peep and their friends return, this time joined by Forky. The gang embark on a road trip with Bonnie. The adventurous journey turns into an unexpected reunion as Woody’s slight detour leads him to his long-lost friend Bo Peep. As Woody and Bo discuss the old days, they soon start to realize that they’re two worlds apart when it comes to what they want from life as a toy.

Doors to the CALS Ron Robinson Theater open at 2pm with the screening starting at 2:30pm.  Prior to the showing of Toy Story 4, a five minute play from each semester of the Young Storytellers program will be performed.

Sunday evening, two episodes of Stranger Things, Season 2 will be shown.  Will Byers finds himself the target of the Upside Down a year after his disappearance as a large tentacled figure named the Mind Flayer soon terrorizes the citizens of Hawkins, drawing back Joyce and Hopper along with Mike’s sister Nancy, Will’s brother Jonathan, and Nancy’s boyfriend Steve, as well as Will’s close friends; Mike, Dustin and Lucas.

The whole group along with Californian newcomer Maxine as well as a missing Eleven must join forces once again to prevent the threat from increasing.

Following both screenings, Stanton will engage in a Q&A with ACS founder Jeff Nichols.