But all things must come to an end.

The day before the blog started, the Clinton Presidential Bridge was dedicated on a very hot day.  My favorite memory from that day was seeing Skip and Billie Rutherford along with Rosi Smith escorting Bill Bowen and Sen. Dale Bumpers to the event and away from it. The trio wanted to be sure these two longtime Clinton friends who had an appreciation for history were present at this milestone event. Now over seven years later both of those legal and political giants are gone.

The next day kicked off 2011’s National Arts & Humanities month, as well as this blog. The first entry focused on the Arkansas Symphony Orchestra concerts on October 1 and 2. The theme of the evening was Italian Vacation.  The program consisted of Mendelssohn’s Symphony No. 4 in A, Op. 90, Rossini’s, Overture to The Italian Girl in Algiers, Puccini’s Chrysanthemums, and Respighi’s Pines of Rome.

A lot has changed in these 100 months.  There have been leadership changes at almost all of Little Rock’s cultural institutions.  Quite a few legendary arts leaders and supporters have died.  Robinson Center Performance Hall closed for 28 months and re-emerged as a state-of-the-art performance and event facility.  The Arkansas Arts Center has temporarily left MacArthur Park while its facility is completely reimagined (with a renewed emphasis on its original 9th Street façade).  The Arkansas Rep ceased operations for 10 months and then returned (but still needs continued local support). Scores of sculptures have been placed in the Vogel Schwartz Sculpture Garden and throughout Little Rock. The Little Rock Zoo has welcomed many babies and bid farewell to some longtime favorites.  We said goodbye to Riverfest and the Little Rock Film Festival and welcomed both the ACANSA Arts Festival and Arkansas Cinema Society.  And the list could go on.  (You can look back over the past 100 months to see everything.)

A look back through this blog sees some features started and abandoned. (The Architeazer and the Monday Musings became too tedious to keep up.)  As the blog progressed, the historical looks at Little Rock’s past and the features on individuals emerged as the most popular entries.  Food, sports history, and civic engagement were added as entry topics.

The blog is not going to disappear. It just won’t have new content added to it.  If and when I do decide to take it down, rest assured it will be archived. The historian in me could not allow it to simply vanish and be lost to time and the cyberether.

I will still appear on other platforms sharing information from time to time.  My social media accounts will still promote cultural events.  I’m not going away.  I’m just closing this chapter.

Honestly, the blog has become a chore.  I don’t have the time for it.  And I don’t believe in a sporadic updating of it.

I am trying to finish a book on the decades-long effort to construct a municipal auditorium in Little Rock, and have ideas for three future books. (You can hear a little about my Robinson Auditorium project at the Clinton School at 6pm on Wednesday, February 19.)  I need to focus my free time on writing so that I can conclude the book period of time shorter than it took to actually get the edifice in Little Rock.  I have also taken on more volunteer duties with my beloved Missouri State University and am now serving in a leadership role with Americans for the Arts. Each of these require more attention.

When I started this, I wanted it to be fun–for me as the writer and for you as the reader.  For the most part it has stayed that way.  I had no thought about how long it would last, or how I would know it was time to end it. Now I do know.

I am grateful for opportunities this blog has afforded me.  I can never fully express how much the compliments and comments from readers have meant to me.  I have met people and made friendships as a result of this blog.  I am definitely a better person because of this undertaking. (This blog has kept me occupied as I recuperated after a broken ankle, through the mourning of my grandmother’s death, and during several other personal challenges.)

I’ve never run out of things to write.

It was amazing.  I would normally sit down between the 10th and 15th of a month and start mapping out the next month’s entries.  Often that first look at the month would see enormous gaps.  I’d wonder if THIS would be the month I would not have much to say.  But then, each month, it would fill up.  There were Clinton School speakers, Oxford American concerts, CALS Ron Robinson Theater offerings, the Rep, the Symphony, the Arts Center, the Museum of Discovery, etc., etc., etc. Even this week, as I was working on the final entries, I kept coming up with additional things to add to these last few days.

I will be honest; it has been hard to make this transition. I still see events in February or March and start to think about them as future blog entries. Then I remind myself I do not need to do that.  Walking away from it will be an adjustment.  But I am ready to make that adjustment. I am at peace with decision.

I actually nearly closed it down over the summer. But I realized that January 2020 would be the 100th month, so I decided to go out with that.

What no one knows (until now) is that I also obsessed over the statistics (that is how I easily knew January would be the 100th month). I analyzed readership and compared each month to prior ones.  It became a ritual for me each morning before work to see where the current month fell in relationship to all the other months in about five different categories.  I’ll miss the number crunching. (I truly am a big geek.)  But in time I’ll find something else to replace it. (NCAA basketball tournaments are around the corner, and then MLB baseball, the Tony Awards offer me a lot of statistics, college football, Little Rock historical election data, Missouri State University data—well, you get the picture.)

Thank you to everyone who sent me press releases, story ideas, or in other ways contributed content.

Thank you to everyone who read this, who shared this, who encouraged others to read the website, who posted it on social media.

In old school journalism the end of a story or a press release was notated with -30-. That let the editor know the story was at an end. There was no more. No further pages. No continuation.

While now people generally use ### instead, I’m old school.

So let my penultimate statement be a simple yet heartfelt “Thank You.”

For the final word…. 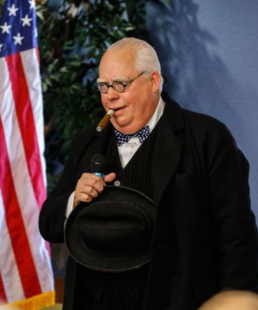 Autumn. 1940. London. Never have so many been so inspired by one man heroically leading the Brithish people to Victory from a London Rooftop. You are living through one night of The Blitz, the German bombing of London.

But never fear. Winston is here!

Actor and Churchill expert Randy Otto brings Winston Churchill to life before your very eyes in this dramatic performance based on the real-life man himself.

ACANSA Arts Festival of the South is presenting Winston Churchill: The Blitz tonight at the CALS Ron Robinson Theater.  Tickets are $30.  Doors open at 6pm; the performance begins at 7pm.

The 2020 Arkansas Food Hall of Fame finalists were announced today (January 27) at the Division of Arkansas Heritage headquarters.

As Secretary of Parks, Heritage, and Tourism Stacy Hurst noted, “The number of nominations confirms that people are indeed opinionated about their food.”  She continued, “Food is woven into our culture and our heritage.”

The 2020 Arkansas Food of the Year is Rice. Not only is it a staple in many restaurants throughout the state, it is also a major contributor to the state’s economy.

The finalists in four of the five categories were announced. The fifth, the People’s Choice Award, goes to the entity that received the most nomination submissions. It will be announced, along with the winners in the other categories, at the Arkansas Food Hall of Fame ceremony on Monday, February 24 at the CALS Ron Robinson Theater.

The finalists in the other four categories are:

Play bingo to some of the most hilarious movie cliches during a screening of the so-bad-it’s-good film, The Mole People. Win prizes including free movie and event tickets to upcoming shows at the CALS Ron Robinson Theater!

On an archaeological dig in Asia, Dr. Roger Bentley finds a cuneiform tablet referring to an ancient society, the Shadow Dynasty, that was destroyed. An earthquake soon after reveals an ancient artifact and the scientists discover the ruins of an ancient temple world on a remote mountain site. It leads them to an underground world, lost in time, where people have adapted to low light. The High Priest Elinu doesn’t welcome the presence of the new arrivals and wants them eliminated.

“Gee Dad,” among the cast of this 1956 movie is Hugh Beaumont who would start filming “Leave It to Beaver” the following year.  Playing Elinu is Alan Napier, perhaps best known for his stint as Alfred the butler in TV’s “Batman.”

We all know that music matters.  Well tonight (January 13) at the CALS Ron Robinson Theater, the “Music Matters” concert will feature a variety of local and regional musicians who are coming together for a musical event in support of the Little Rock School District’s Fine Arts programming.

Tickets are $15 in advance and $20 at the door. You’d pay $20 or more to hear any single one of these performers. So this is quite a bargain to hear all of them over a three hour time period!  And it is for a great cause!

Make plans to join the Arkansas Cinema Society for their first event of 2020, a screening of “Love Them First” with co-director Ben Garvin.  It is presented in conjunction with the Clinton School of Public Service.

“Love Them First: Lessons from Lucy Laney Elementary” follows the determination of a charismatic north Minneapolis elementary school principal, Mauri Friestleben, as she sets out to undo history.

But when the school encounters a heartbreaking setback, Friestleben confronts the true measure of student success. It’s a story of inspiration, heartbreak, perseverance and the power of love.