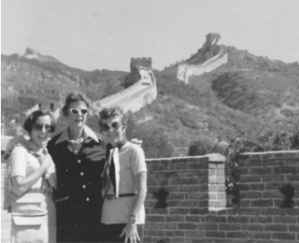 On September 1, 1975, a group from the Arkansas Arts Center left Little Rock for a study tour of China. This was the first non-governmental group from the United States who had been authorized to tour the People’s Republic of China.

Fred Poe, of Poe Travel, and Jeane Hamilton were the organizers of the trip.  It was part of the annual travel seminars the Arts Center  would take to locations throughout the world to learn more about art and culture.  It took many months of planning as wells as mounds and pounds of paperwork to get this trip underway.

The AAC Traveling Seminar participants in front of Mao’s birthplace. (Photo from the Jeane Hamilton collection.)