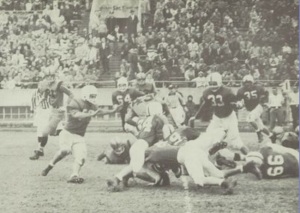 The November 28, 1957, football game on Thanksgiving Day between Little Rock Central and North Little Rock had been poised to be memorable for a few years.

With the 1957 opening of Little Rock Hall High, the Tigers would switch their rivalry on Thanksgiving Day from a cross-river one to a cross-town one starting in 1958.  So the 1957 edition of Tigers vs. Wildcats was set to be historic as the end of a 24 year tradition.

(In its first year, Hall played smaller schools because its team was largely younger.  It would move up to top classification schools in the 1958 season.)

The events at Little Rock Central in September 1957 added a new layer of history to everything that school year.  The 101st Airborne was sent in by President Eisenhower in the evening of September 24 to ensure the Little Rock Nine were able to attend classes.  But President Eisenhower did not intend the Army to be there indefinitely.  On Wednesday, November 27, the soldiers left Little Rock. The National Guard was now charged with keeping the peace at Central.

The first day without the US Army was also Thanksgiving Day, and the final Bengals vs. Cats game.  The sports coverage of this game however belied all the drama off the field. News reports focused on Turkey Day as the final game between the longtime rivals and on the fact that it had a morning start time instead of the traditional afternoon start time.

In the end, the Tigers had the same result as they did in the first Turkey Day meeting: a win.  The Bengals scored 40 while the Cats only managed 7.

After 24 meetings on Thanksgiving Day, Little Rock had 19 wins, 4 losses, and one tie.  Seven times they shut out the Wildcats, and one time the northern team blanked them.  The fewest total points scored were 2 in the 1934 game, while the 1950 game produced a cumulative total of 71 points (LR 64, NLR 7).  The Tigers scored a total of 517 points over 24 games and gave up only 203.