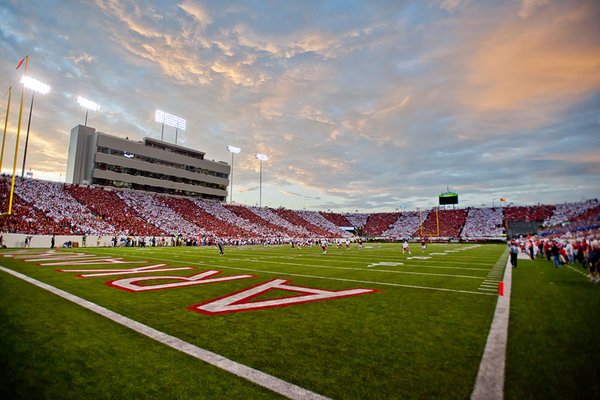 Today, the Arkansas Razorbacks take on the Missouri Tigers at War Memorial Stadium.  It marks the eighth time the Hogs have played in Little Rock on the Friday after Thanksgiving.

(The only time in the War Memorial Stadium era they played on Thanksgiving was 1969. In the late 19th and early 20th Century, they sometimes played in Little Rock on Thanksgiving at West End Park, now the site of Central High School and Quigley Stadium)

The first seven times they played on the Friday after Thanksgiving were against LSU.  While today’s game is also against a team of Tigers, this is the first time they’ve been the Mizzou Tigers.

From the 1940s through the 1980s, the Hogs would sometimes play on the Saturday after Thanksgiving.  It was after joining the SEC that in 1996, they first faced off against LSU on the Friday after Thanksgiving.  That year, they lost to LSU by the score of 17 to 7. The Tigers had been ranked 19 going into the game.  The attendance that year was 22,329.  The game was Danny Ford’s penultimate season as the Hogs head coach.

Following that year, the LSU game against the Razorbacks was moved to Fayetteville.