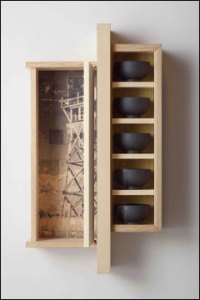 This exhibition combines two projects of Wendy Maruyama, a studio furniture maker and head of the studio furniture program at San Diego State University. These projects, the Tag Project and Executive Order 9066, together tell the story of the Japanese-American internment camps during World War II.

In the Tag Project, Maruyama replicated 120,000 individual identification tags worn by the internees in the ten relocation camps, including two in Arkansas. Maruyama assembled the re-created paper tags in ten groups, each group representing all the internees at a specific camp. Each of these groupings hangs from the gallery ceiling and is about 11 feet tall. Maruyama has folded the Tag Project into a parallel project of hers titled Executive Order 9066 to show them together in this exhibition.

Executive Order 9066 was the directive signed by President Franklin D. Roosevelt ordering the incarceration of all people of Japanese ancestry then resident in the United States. For the parallel project, Maruyama created work that explores ethnicity and identity through suitcases, footlockers and steamer trunks, artifacts from their owners’ forced relocation journey in 1942.

The exhibits were organized by The Society of Arts and Crafts in Boston.

The Arts Center has collaborated with the Butler Center for Arkansas Studies and the Arkansas Center for History and Culture to organize Relics of Rohwer: Gaman and the Art of Perseverance, a related exhibition documenting the experiences and artwork of Japanese Americans at Rohwer, one of two internment camps located in Arkansas.The artwork is on loan from the Mabel Rose Jamison Vogel/Rosalie Santine Gould Collection, Butler Center for Arkansas Studies, Central Arkansas Library System.