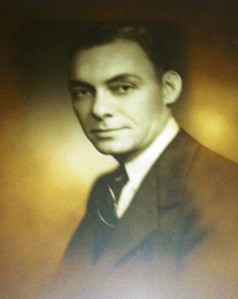 On May 14, 1902, future Little Rock Mayor John Vines Satterfield, Jr. was born in Marion.   He grew up in Little Rock and Earle. J.V. was a star quarterback for the Earle football team and is featured in a painting of that team by respected painter Carroll Cloar.

Following high school, J.V. taught (including, much to his family’s amusement, a course in penmanship) and coached and sold Fords.  He then moved to Little Rock and sold insurance and later securities.  In 1931 he opened his own business; that same year he built a house at 40 Beverly Place in Little Rock, which would serve as his home until his death.

J. V. Satterfield was elected to serve as Mayor of Little Rock in 1939 and served one term, until 1941.  He was credited with saving the City from bankruptcy because of his fiscal policies. Among his efficiencies were the creation of a central purchasing office and using grass moved from the airport to feed the Zoo animals.

Though as a private citizen he had voted against the creation of a municipal auditorium in 1937, Mayor Satterfield fought valiantly to ensure that Robinson Auditorium opened to the public once he took office.  Shortly after he became Mayor, it was discovered that there were not sufficient funds to finish the construction. After the federal government refused to put in more money, he was able to negotiate with some of the contractors to arrange for the building to be completed. He also oversaw a successful special election to raise the money to finish the project.

Satterfield was a staunch supporter of the airport and worked to expand it.  He would serve as the chair of the first Municipal Airport Commission.  He also established the Little Rock Housing Authority (on which he would later serve on the board).  Mayor Satterfield also served as President of the Arkansas Municipal League in 1941.

Following the outbreak of World War II, Satterfield enlisted in the Army and was given the rank of a Major. He later was promoted to a Colonel and worked in the Pentagon during its early days.

In the late 1940s Satterfield became president of a small Little Rock bank called People’s Bank.  The bank changed its named to First National Bank when it moved into new offices at 3rd and Louisiana in 1953.  By focusing on smaller customers and courting corporate customers, Satterfield grew the bank into one of the state’s largest banks.  He maintained his desk in the lobby of the bank so he could interact with the customers and ensure they were having a positive experience.

Due to chronic health issues, Satterfield retired from the bank in 1964. He died in March 1966.