Yesterday’s Architeaser was a cross-shaped shadow cast on the floor of the Arkansas Arts Center atrium.  The panes in a window at the top of the atrium caused the cross-shape.

Continuing with shadows, here is today’s.

In 1986, Arkansas Arts Center Director and Chief Curator Townsend Wolfe organized the first National Drawing Invitational to further advance the Arts Center’s commitment to collect and exhibit drawings and to focus on living American artists and their work. For the 11th National Drawing Invitational, guest Curator Charlotta Kotik puts together an exhibition that features drawings by ten New York artists whose works border on obsession in their execution.

Charlotta Kotik works as a writer and independent curator, facilitating various projects for galleries around the world. Until 2007, Kotik was Chair and Curator at the Brooklyn Museum of Art Drawing Department. Currently, Kotik is Curator Emerita at the museum. During the course of her career, Ms. Kotik has organized over 100 museums exhibitions, presenting the work by contemporary artists such as Mariko Mori, Kerry James Marshall, John Cage, Jenny Holzer and Robert Longo.

Yesterday’s Architeaser was a detail of brick designs on the old Heights Theatre, which was built as a single screen, 850 seat movie theatre. Opening in 1946, it was designed by Edwin B. Cromwell. The movie theatre closed in 1985. Since then the building has been repurposed and now houses shops and restaurants.

Today’s Architeaser starts a week of looking at shadows that architectural elements can cast. 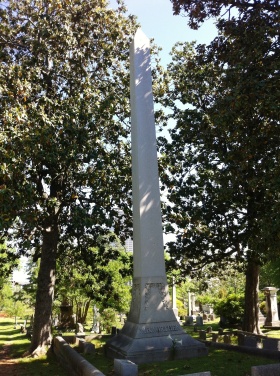 Today is the annual Mt. Holly Cemetery RIP (Rest in Perpetuity) picnic.  Today’s Sculpture Vulture feature is an obelisk in Mt. Holly which serves as a grave marker for Arkansas banker and author W. B. Worthen.

William Booker Worthen was born in Little Rock in 1852.  In 1874, he entered the banking business which in 1888 became known as W. B. Worthen and Company. Later known as Worthen Bank, it survived through recessions, world wars and the Great Depression.  Mr. Worthen also served as publisher of the Arkansas Gazette and wrote a history of the Arkansas banking industry.  He died in 1911.

The obelisk is the tallest structure in Mt. Holly Cemetery and is likely the tallest monument in Little Rock. Though it is still a very impressive structure, the trees which have grown up along side of it now obscure the obelisk from view outside of the cemetery.

The obelisk is four-sided with largely smooth faces until the pointed top.  At the base, in addition to Mr. Worthen’s name, there is some ornamentation for a couple of feet.  But by early 20th century standards the ornamentation is simple.

Other members of the Worthen family are buried in the plot marked by the obelisk, as well as throughout the cemetery.  Mr. Worthen’s granddaughter-in-law, Mary F. Worthen has been a member of the Cemetery Association since the 1950s.  One great-grandson, George, continues in the banking business while another, Bill, is director of Historic Arkansas Museum.

Yesterday’s Architeaser was the latticework on the old Little Rock Public Library building.  It opened in 1964 and was adjacent to the original Carnegie Library, which was torn down.

After the library vacated the space in 1997 for a River Market location, the building sat vacant.  Several plans for developing it were floated and abandoned.  In 2006, Entergy purchased the building and now uses it for a data services facility. 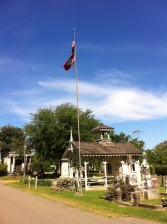 Mt. Holly Cemetery has been called the Westminster Abbey of Arkansas because so many distinguished Arkansans are buried there.  But it is also the final resting place of many every day, ordinary Arkansans. They may not have been famous, but they were no less special to their family members and friends.

Even if one has no relatives buried in Mt. Holly, it is worth a visit.  The cemetery boasts many interesting and unique headstones as well as bountiful flowers and landscaping.

As can be imagined, it costs money to keep up a cemetery. As a fundraiser, the Mt. Holly Cemetery Association created the “Restore in Perpetuity” picnic a few years ago.  RIP, or as the Culture Vulture likes to call it, “Dining with the Dead,” includes a picnic, silent auction, live music and tours of the cemetery.

The picnic this year is tomorrow, Sunday, April 29 from 5pm to 7pm.  Tickets are $75 for adults and $25 for children under 12.  In case of rain, it will be moved to Trinity Episcopal Cathedral.

The Architeaser for yesterday was (like the previous day) a telephone company building.  Though most people probably recognized the old Southwestern Bell tower building for its radar dishes and antennas atop the tower, the original building at street level has the decorative brickwork featured yesterday.  That original building has been expanded, with both sides now surrounded by a newer building (including the aforementioned tower).