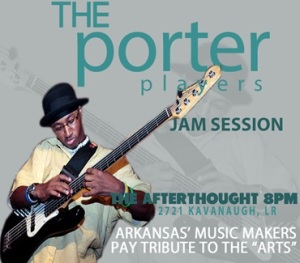 An important part of jazz is collaboration and improvisation.  Tonight, as part of 2015 “A Work of Art” Jazz Week, the Porter Players will have a jam session at The Afterthought.  This free event starts at 8pm and goes until……..

“A Work of Art” is the primary fundraiser for the Art Porter Music Education scholarship program. All proceeds from the week-long fundraiser benefit the scholarship fund. “A Work of Art” concludes in early August in observance of the birth month of Art Porter, Jr. Attendees enjoy a week of unique educational experiences by an impressive group of local artists, music students and national recording artists.

Ticket information is available at www.artporter.org.

Emboldened by the return of Lord Voldemort, the Death Eaters are wreaking havoc in both the Muggle and wizarding worlds. Hogwarts, once thought to be a safe haven, may no longer be safe. Harry suspects that new dangers may lie within the castle, but Dumbledore is more intent upon preparing him for the final battle that he knows is fast approaching. Harry will have to help him uncover a vital key to unlocking Voldemort’s defenses, a critical piece of information known only to Horace Slughorn, Hogwarts’ former Potions Professor. Dumbledore manipulates his old colleague into returning to his previous post with promises of more money, a bigger office and the chance to teach the famous Harry Potter.

David Yates returns to direct this 2009 film, becoming the second person to director more than one movie in the series.  Daniel Radcliffe, Emma Watson, Rupert Grint, Michael Gambon and Maggie Smith returned to Hogwarts for this film.

The screening of all eight movies from Sunday, July 26 – Saturday, August 1 will celebrate Harry Potter’s July 31 birthday. Special Harry Potter-themed concessions, activities, and prizes are part of the festivities at 100 River Market Avenue.

Tickets are $7 each for single tickets. Concessions will be available for purchase at every showing, and beer and wine are available at screenings scheduled after 5 p.m.

Some planned activities for movie-goers include being sorted into Hogwarts houses, competing for House Cup points, photo booths, and a horcrux scavenger hunt. Unique treats include candy from Kilwin’s and magical ice cream from Loblolly Creamery. Doors open and activities begin one hour before show time.

The movies continue in order through Friday at 7pm.  On Saturday the final two films will be shown at 1pm and 7pm.

If you see one or all 8, be sure and use #CALSPotterMarathon on social media. 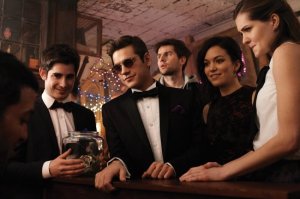 At 5pm, the film Those People will be shown at The Studio Theatre.

On Manhattan’s gilded Upper East Side, a young painter, CHARLIE (Jonathan Gordon), finds the man of his dreams in an older pianist from across the globe, TIM (Haaz Sleiman). If only Charlie weren’t secretly in love with his own manipulative best friend, SEBASTIAN (Jason Ralph), who is embroiled in a financial scandal. In the wake of Sebastian’s notoriety, their tight-knit group of friends must confront the new realities of adulthood.

At 7pm, back at The Studio Theatre, the HRC Arkansas Spotlight Feature Game Face will be shown.
The award winning documentary GAME FACE tells the parallel story of Fallon Fox, MMAs first transgender pro fighter, and Terrence Clemens, a young, ambitious and talented college basketball player in Oklahoma, who happens to be gay. Both realize that coming out will be necessary for their own sense of integrity and peace of mind, but the lack of a clear roadmap and the unpredictable consequences instill understandable anxiety and caution. NBA player Jason Collins, NFL player Wade Davis, NCAA Division 1 basketball player Kye Allums and triathlete Chris Mosier also appear in the film.

From 9pm to 10:30pm, the HRC Arkansas Friday Night Party will take place at The Lobby Bar.

At 10:30pm at The Studio Theatre, The night ends with the camp-horror movie You’re Killing Me, which is presented by Fantastic Cinema. 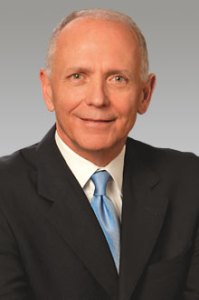 On July 31, 1942, future Little Rock Mayor Dalton James “Jim” Dailey, Jr. was born to Dalton and Ellen Dailey.  After graduating from Little Rock Catholic High School, he attended the University of Arkansas at Fayetteville.  He graduated with a Bachelor of Science degree in Business Administration. He joined his father in the family business, Dailey’s Office Furniture.

In 1974, Dailey was elected to the City of Little Rock Board of Directors.  He served one four-year term. The last two years of that term, he was the Vice Mayor of Little Rock.

Following that term, he remained engaged in civic activities including serving in leadership capacities in community campaigns.  He also served as president of the National Office Products Association – the first Arkansan to do so.  Dailey also served as the founding chair of Leadership Greater Little Rock.

In 1988, Dailey was elected to return to the City Board.  He was reelected in 1992.  Dailey served as Vice Mayor in 1991 and 1992.  In January 1993, he was chosen by his fellow City Directors to serve a two year term as Mayor.  Under his leadership, the Future-Little Rock goal-setting process took place.

Following a voter-approved change to the City structure, the position of Mayor was changed to be elected by the people while maintaining the City Manager form of government.  On January 1, 1995, Jim Dailey was sworn in as the first popularly-elected Mayor of the City of Little Rock in over 38 years. 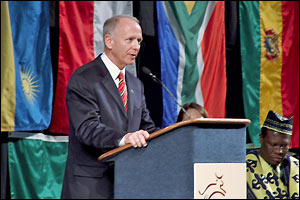 Dailey has served on the Board of Directors for the Little Rock Regional Chamber of Commerce, Metroplan, Communities in Schools, Arkansas BioVentures and New Futures for Youth. He was appointed to the National League of Cities Board of Directors and the Municipalities in Transition on Public Finance.

As Mayor, he served as Chair of the Intergovernmental Advisory Committee of the Federal Communications Commission. He was also a member of the United States Conference of Mayor’s Communications Task Force.  He also served as president of the Arkansas Municipal League in 2002 and 2003.

While he was Mayor of Little Rock, he was a strong proponent of the development of the River Market and worked to locate the Clinton Presidential Library in Little Rock.  He also worked to increase public safety support.  He also oversaw the establishment of Central Arkansas Water, the development of downtown headquarters for Acxiom Corporation and Heifer International, and the creation of Prevention, Intervention and Treatment programs.  In addition, he was instrumental in leading the efforts for the 40th anniversary of the integration of Little Rock Central High in 1997.

Mayor Dailey was re-elected in 1998 and 2002.  His fourteen years as Mayor of Little Rock set a longevity record.  Upon his retirement the City’s fitness center was renamed the Jim Dailey Fitness and Aquatic Center.  This was in recognition of his lifelong interest in wellness activities.

Since leaving office, he has continued his civic involvement by serving as a member of the Little Rock Airport Commission which oversees the Bill and Hillary Clinton National Airport. He is also involved in commercial real estate.

Since 1965, he has been married to the former Patti Murphy.  They have four children and six grandchildren. 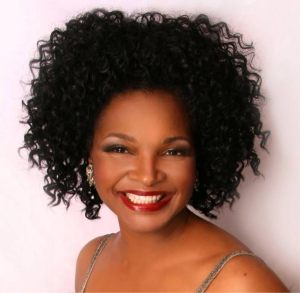 El Dorado native Cynthia Scott brings her vocal prowess to Little Rock tonight (July 30) for the 2015 “A Work of Art” Jazz Week.  She will be performing her blend of swing, soul, and jazz at 7pm and 9pm at Club Sway.

For three decades, the vocal artistry of the multi-talented Arkansas-born vocalist Cynthia Scott has encompassed the swing of jazz, the soul of blues, R&B, and the sacred stirrings of gospel music. She is loved by audiences from New York to Africa, Europe and Asia; by musicians from Wynton Marsalis to Ray Charles – who discovered her – and by jazz critics like the Chicago Tribune’s Howard Reich, who called her “a mesmerizing vocalist.”  A talented actress and playwright, she brings these skills to her singing as she uses each song to tell a story.

“A Work of Art” is the primary fundraiser for the Art Porter Music Education scholarship program. All proceeds from the week-long fundraiser benefit the scholarship fund. “A Work of Art” concludes in early August in observance of the birth month of Art Porter, Jr. Attendees enjoy a week of unique educational experiences by an impressive group of local artists, music students and national recording artists.

Ticket information is available at www.artporter.org.

Nikola Tesla was born in July, and The Museum of Discovery wants you to have the party!  This month’s Science after Dark (tonight from 6pm to 9pm) celebrates his birthday and gives a once in a lifetime chance to experience the Guinness World Record musical bi-polar Tesla coil in the evening.

The tesla coil – named after its inventor Nikola Tesla, the developer of the alternating current system of electricity used today – is a device that creates high-voltage electricity at a high frequency visible to the eye.  The Museum of Discovery’s coil emits electrical discharges to a variety of songs and will share the record for the world’s largest bi-polar tesla coil with the coil at the Hands On Regional Museum in Johnson City, Tennessee.

The device, which can produce 200,000 volts of electricity, was built by Goodchild Engineering in Arizona and donated to the Museum of Discovery by Richard Mathias, founder and president of Tesla Coil Museum Exhibit Program, LLC, through a matching grant program from the General Electric Foundation.

“This world-record tesla coil will literally illuminate the work of this pivotal inventor and help the Museum of Discovery successfully fulfill its mission of igniting a passion for science, technology and math in our very interactive, hands-on environment,” said Kelley Bass, museum CEO. “We are grateful to Richard Mathias and the GE Foundation for making this opportunity possible for our museum and our visitors.”

The coil is housed in a new theater in the museum’s Discovery Hall.

Shows will be free but seating is limited so arrive early to get your ticket. Science After Dark admission is $5, free to museum members.  You must be 21 or older to attend Science after Dark.

The Film Society of Little Rock is happy to announce the inaugural year of Kaleidoscope,​ Arkansas’s first LGBT film festival to be held July 30 through August 2, 2015 in downtown Little Rock, Arkansas.

Kaleidoscope celebrates the diversity of the LGBT community and filmmakers by presenting poignant and thought­-provoking films documenting LGBT lives truthfully and with respect. Kaleidoscope focuses on the power of film to transform lives and opinions of those both inside and outside the LGBT community through the universal medium of the cinema.

The night before the party, Henry and his friend Gabe, have a sleepover. Typical teenage boy chat quickly turns sexual, and it’s silently implied that Henry, on a search for identity, has a crush on Gabe.

As dawn arrives on the day of the party, Henry’s mom Kat wakes in a state of limbo, middle-aged, with a secret. A little while later, Pastor Bob is making breakfast, and they are joined by Henry’s 19-year-old sister Autumn, home from college for the party. Later that afternoon, guests begin to arrive – the assistant pastor, youth minister, husbands and wives; sons and daughters trapped between youth and adulthood, as well as Henry’s own teenaged church and “secular” friends, including the closeted young Logan, who has eyes for Henry.

As day turns to night and clothes come off, Henry & Co. carefully navigate the religious strictures and sexual secrets held within the community, all struggling to tread the public and private, and their longing, despite themselves and their faith, for earthly love.

Following the film (and a discussion moderated by Lindsey Millar of the Arkansas Times) at the Studio Theatre, there will be an opening night party next door at the Lobby Bar.

The Film Society of Little Rock is a grassroots, non-­profit organization focused on the expansion of the creative community in Arkansas by providing year round opportunities to educate, entertain, and exhibit local, national, and international filmmakers and their works.