Families with young children who cannot stay up late to ring in the New Year can ring in the “Noon Year” at the Museum of Discovery’s “Noon Year’s Eve” event from 10 a.m. to 1 p.m. on Monday, December 31.
At “Noon Year’s Eve” families can make noisemakers, enjoy hands-on science activities and learn more about New Year’s traditions. The highlight, however, will be a countdown to noon featuring a large balloon drop.
“Our ‘Noon Year’s’ countdown allows families who might miss the big countdown to midnight due to early bedtimes to get in on the fun,” said Peggy Thibodeau, museum educator and event leader. “It really is the best of both worlds because you get to celebrate without losing any sleep, and you learn while doing so.”
“Noon Year’s Eve” is included in regular museum admission: $10 for adults; $8 for children 12 and under; $2 for SNAP benefits recipients; and free for museum members and children under 1. For more information, visit www.museumofdiscovery.org or call 501-396-7050.

After months of planning, on Saturday, December 29, 1821, the first edition of ARKANSAS GAZETTE to be published in Little Rock came off the press.  Due to a shortage of paper supplies, it was only a two page edition, instead of the four pages which publisher William Woodruff had been customarily printing.

Because the capitol of the Arkansas Territory had moved from Arkansas Post to Little Rock earlier in 1821, Woodruff wanted to relocate as well.  Not only did it make sense for a newspaperman to be close to the seat of government for purposes of stories, there was a financial reason for the move, too.  Woodruff wanted to continue to be the contracted official publisher of government records.  If he stayed in Arkansas Post, someone else would certainly have opened up an operation in Little Rock to do the printing.

The first Little Rock edition featured the usual mix of national news (often culled from other newspapers once they arrived at Woodruff’s establishment), local stories, and advertisements.  One of the stories was a letter from General Andrew Jackson to the citizens of the Florida Territory.  There was also a dispatch from Pernambuco, Brazil.

Because it was the first issue from Little Rock, Woodruff took time to write about Little Rock.  He noted it was located on the south side of the Arkansas River on a “beautiful gravelly bluff” with picturesque views of the river and surrounding areas.  He noted the territorial and federal government offices which were located in Little Rock. 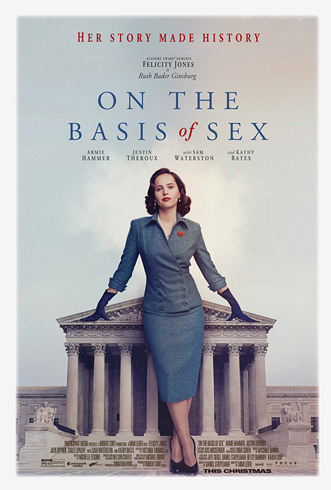 Before she was a Supreme Court Justice (and an action figure), Ruth Bader Ginsburg made history as a crusading young attorney.  This chapter of her life is the subject of the new movie ON THE BASIS OF SEX.

This afternoon (Dec 29) at 5pm, the Arkansas Cinema Society presents a free sneak preview of the film.  Doors to the Ron Robinson Theater open at 4:30.

Felicity Jones and Armie Hammer play gender-rights crusader Ruth Bader Ginsburg and her husband Marty in this early-career courtroom drama. Others in the cast include Justin Theroux, Jack Reynor, Cailee Spaeny, Sam Waterston, and Kathy Bates.  The movie was directed by Mimi Leder from a screenplay by Daniel Stiepleman.

Following the screening, there will be a panel discussion. It will feature UA Little Rock Bowen School of Law Dean Theresa Beiner; Professor Beth Levi, JD, of the Bowen School; Justice Annabelle Imber Tuck, retired member of the Arkansas Supreme Court; Judge Ellen Brantley, retired Pulaski County Circuit Court judge; and attorney Tijuana Byrd, who is president of the Women’s Foundation of Arkansas board.  The panel will be moderated by Alison Williams, who serves as Chief of Staff to Governor Asa Hutchinson and is a member of the Arkansas Cinema Society Board. 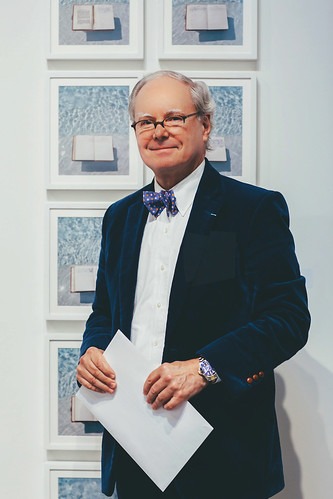 Sunday, December 30 is the final day to view Independent Vision: Modern and Contemporary Art from the Martin Muller Collection at the Arkansas Arts Center.

San Francisco-based gallerist and collector Martin Muller curated the exhibition from his personal collection as a tribute to Little Rock – the city where he spent his formative early years in America. During those years, Muller discovered an affinity for post-war American painting in the quiet library of the Arkansas Arts Center. It was the beginning of a lifelong, relentless pursuit of new artistic treasures.

“This was the beginning of a rich, colorful, challenging and rewarding journey, started in Little Rock, where I made many lifelong friends,” Muller said.

Independent Vision draws from Muller’s personal collection – and represents 77 artists he has championed throughout his career. Together, these works form a picture of Muller the collector, on a life-long journey for enlightenment through art and literature.

Born in Switzerland, Muller moved to Little Rock in 1975 to take a job with a Swiss-American company based in Little Rock.

Muller was an avid student of 19th and 20th century Russian literature and art – but developed a fascination with post-war American painting – Abstract Expressionism, Pop Art and Minimalism. While living in Little Rock, he pursued his studies in the Elizabeth P. Taylor library of the Arkansas Arts Center. In 1977, having decided to pursue his passion for art professionally, Muller moved west and opened Modernism, Inc. in San Francisco’s warehouse district South of Market.

“During my trip cross country, I marveled at discovering masterpieces of modern American art, from Edward Hopper to Barnett Newman, Mark Rothko, Jackson Pollock, and later, the Pop and Minimalist artists, especially Donald Judd,” Muller said. “Now, some 40 years later, it gives me great joy to have come full circle back to Little Rock and be able to share at the Arkansas Arts Center some of the wonderful artworks gathered along the way.”

Founded in 1979, Modernism has since presented more than 450 exhibitions, both historical and contemporary, in media ranging from painting to photography, sculpture to performance, by an international roster of artists. Throughout its 39 years, Muller has aspired to keep the gallery’s challenging, museum quality program at the forefront of the art world, with exhibitions encompassing Dada, Cubism, Surrealism, Vorticism and German Expressionism. Muller was also an early promoter and champion of the artists of the Russian Avant-Garde (1910–1930) in the United States. The gallery has held a long list of exhibition “firsts” – in 1980, Modernism held the first exhibition of the Russian Avant-Garde in a West Coast gallery, the first Andy Warhol show in San Francisco in 1982, and in 2003, the first Le Corbusier gallery show in the United States.

For the final show in his December Sessions, John Willis is bringing his incredible Radiohead tribute show back to the South on Main stage. Concert starts at 8 pm. Purchase advance tickets for $12 or pay $15 at the door. Tickets do not guarantee you a seat. Please call (501) 244-9660 to reserve a table.

ABOUT JOHN WILLIS
John Willis is a singer, songwriter, pianist, composer, arranger, and musical director based in Little Rock, Arkansas. He currently performs on his own and as one-sixth of the multi-vocalist synth-pop group Silver Anchors. His most recent original release, “Try Again,” can be found on all online music outlets. In addition to performing, writing, and arranging, Willis spends a lot of time in the theatre, both playing and directing for musical theatre. Recent credits include Hedwig and the Angry Inch and The Best Little Whorehouse in Texas, both at The Studio Theatre in Little Rock.

Willis is thrilled to celebrate his birthday month as well as the holiday season with great shows each Wednesday in December at South on Main. Catch Willis himself fronting a veritable Little Rock all-star tribute to the music of Radiohead to close out this month’s Sessions on Wednesday, December 26.

Though largely forgotten today, Little Rock native Fay Templeton was one of the leading stars of vaudeville and Broadway in the late 1800s and early 1900s.

She was born in Little Rock on Christmas Day in 1865.  Her parents were touring here with the Templeton Opera Company. Her father, John Templeton, was a well-known Southern theatre manager, comedian, and author. Her mother, Helen Alice Vane, starred with her husband.  The family of three left Little Rock a few weeks after Fay was born, once her mother was able to travel.

In the late 1880s and early 1890s, she spent most of her time in Europe, appearing on stage and touring shows.  By 1895, she was back on stage in New York.  She then starred in a series of shows first for the vaudeville team of Joe Weber and Lew Fields, later for George M. Cohan. She introduced the songs “So Long Mary” and “Mary Is a Grand Old Name” in the latter’s Forty-Five Minutes from Broadway.  Her work with Cohan is portrayed in the Oscar winning film Yankee Doodle Dandy and in the Tony winning musical George M!

She retired from the stage after marrying Pittsburgh businessman William Patterson. But by 1911, Fay was once again touring with Weber and Fields.  She retired again in 1913, this time staying off stage until 1926. She then played the role of Buttercup in a revival of HMS Pinafore and would be known as the definitive Buttercup for the rest of the 1920s and into the 1930s.  When her husband died in 1932, she returned to the stage.  In 1933, she starred with Bob Hope in the Jerome Kern musical Roberta.

In 1936, she entered the Actors’ Fund Home in New Jersey, but later moved to San Francisco to live with a cousin.  She died there on October 3, 1939, and is buried in Valhalla, New York.

Templeton returned to Little Rock several times throughout her life as she was embarking on tours.

At the age of 23, he moved to Little Rock in 1838.  After arriving, he soon became the editor and publisher of the Times and Advocate newspaper.  As a publisher and printer, Colby also had the contract to print official state notifications and documents in the early 1840s.

Politically, Colby served as a Justice of the Peace for several years.  In September 1843, he was elected Mayor of Little Rock in a special election to fill a vacancy. He was 28 years and nine months old, making him the youngest mayor in Little Rock’s history.  He left office in January 1844.  He died March 15, 1844, at the age of 29 after a long illness and was buried with Masonic honors.

No image of him is known to exist.